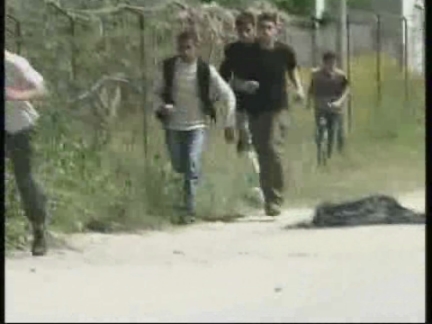 4. Pan of an ambulance with siren blaring

7. Various of wounded Palestinians being driven to hospital

8. Various of wounded Palestinians being carried into hospital

11. Body being carried to morgue

"It is time for you people of the nation to scream, to rise and to revolt as the children die every day because of the violations of the Zionist enemy and American control over the Palestinian people".

17. Wide of speaker talking at podium

Israeli forces fired at a group of Palestinian militants operating near a farm in central Gaza on Friday, killing four people and wounding several, including children, witnesses and doctors said.

It was not immediately clear how many of the casualties were gunmen and how many were civilian bystanders.

The army confirmed troops were operating in Gaza, and that aircraft had struck.

Meanwhile, in the town of Jebaliya on Friday, Palestinians gathered at a Hamas demonstration to protest against a months-old the Israeli blockade of the Gaza Strip.

On Thursday, Israel cut off the only source of fuel to Gaza's 1.4 million (m) residents after a deadly Palestinian raid on the Israeli fuel depot, deepening the seaside territory's hardship.

The territory's Islamic Hamas rulers warned that more attacks will follow, as resentment grows over a months-old Israeli blockade.

During Friday's rally, Hamas lawmaker Mushir al-Masri said the battle of Palestinians against Israel will continue.

"It is time for you people of the nation to scream, to rise and to revolt as the children die every day because of the violations of the Zionist enemy and American control over the Palestinian people," he said.

The inevitable fuel cut off that followed the brazen daylight attack on the only fuel transfer point into Gaza brought charges that Islamic extremists were trying to provoke another round of violence with Israel, while putting Israel in the untenable position of appearing to cause a humanitarian crisis.

Though some Israelis demanded that Israel halt all supplies to Gaza, Israeli defence officials indicated that the fuel cut off would not last past the weekend.

Although Israel pulled out of Gaza in 2005, it remains the main source of imports into the impoverished territory.

Fuel and cargo enter and exit Gaza through two crossing points with Israel, and a third is the main passage for people.

The only direct crossing between Gaza and Egypt is usually closed, as Egypt cooperates with the boycott of the Hamas regime imposed by Israel and the West.

Hamas is threatening to crash through the Egyptian border wall again, after a January breakout allowed hundreds of thousands of Gaza to stream into Egypt for nearly two weeks