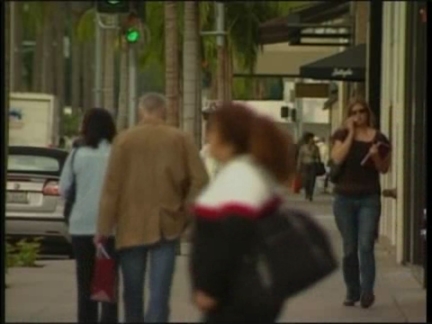 7. Close up of photo of David and Victoria Beckham

"We just heard the news this morning, in fact the kids told us and it was just ah, absolutely unbelievable. Big call for, big call for Beckham and Posh. You're going to have probably one of the best football personalities in your town. It's going to be awesome for football in America, I guess."

Peter: "I don't know how they cope with the football out here."

"I heard it on the news this morning.

(Reporter: "What do you think about that?")

13. Close up of photo of Beckhams

(Reporter: "Do you know who these people are?")

(Reporter: "They're moving from the UK to Los Angeles.")

23. Pan from palm tree to exterior of Frederic Fekkai Salon

25. Close up of hairstylist brushing out woman's hair

26. Close up of woman getting hair coloured, pans to stylist

"We have every treatment they can have. And it's not just going to a regular salon and getting your hair washed and, you know, getting it cut and blown out. We're like going to the finest hotel. We're catering to every need, you know, your nails, every single thing is done to the utmost of perfection with quality and our standards are incredibly high."

31. Close up of diamond-studded necklace in Harry Winston window

32. Close up of elaborate diamond necklace

Beckham turned down a two-year contract extension from Real Madrid, where his fading skills have left him on the bench for most of this season.

The Galaxy didn't say exactly what they'll pay him, but floated a figure of 250 million dollars in salary and commercial endorsements over the five years of his contract.

In other words, his move could be worth 1 million dollars a week.

The MLS season opens in April but Beckham is not expected to join the team until August. His four-year contract with Madrid expires at the end of this season.

His Galaxy deal was negotiated over 10 days by major entertainment industry players Simon Fuller, creator of "American Idol," and Creative Artists Agency, home to some of Hollywood's biggest actors.

Victoria Beckham has expressed a desire to launch a Hollywood career.

He opened a soccer academy at the Galaxy's stadium complex last year, and she was photographed house-hunting in the area.

The couple have two sons, Brooklyn and Romeo.

Drawing paparazzi like movie stars, Beckham and his wife regularly find their way onto tabloid and magazine covers.

David is the epitome of the modern celebrity-athlete - he's David Beckham Inc., a multinational corporation with links to Pepsi,Gillette, Motorola and Adidas.

The United States is the last - and biggest - market where Beckham's cult of personality has little sway.

A superstar whose movements have convulsed Asian capitals and helped sell millions of European tabloids has been able to walk American streets in relative anonymity.

In Los Angeles, Beckham will be raising the profile of an average team in a soccer league that has little respect overseas.

The team averages about 22,000-24,000 fans in its 27,000-seat stadium in suburban Carson, although attendance was down last season when the Galaxy missed the playoffs.

Already in the works is a 2008 Galaxy tour of Asia, where Beckham is wildly popular. A new team logo will be unveiled this summer, and the Galaxy's owner is nearing a deal to slap a prime sponsor's name on its jerseys.

Beckham, who has failed to win any major titles in three seasons in Madrid, said the time was right for a change.