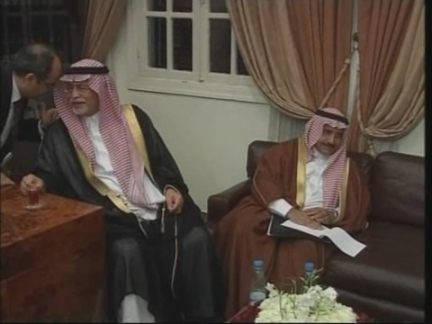 "I had a very important meeting with the Lebanese President and we had an excellent exchange and our relations are well."

The Saudi and Iranian Foreign Ministers met on the sidelines of a gathering of foreign dignitaries in Beirut on Sunday, there to see Lebanon's parliament elect army commander General Michel Suleiman as the country's president in a long-delayed vote.

Representatives from both sides of the Middle East's Sunni-Shiite divide came: the foreign ministers of Syria and Iran, which support Hezbollah, and Saudi Arabia, a strong backer of the government.

"I had a very important meeting with the Lebanese President and we had an excellent exchange and our relations are well," Iranian Foreign Minister, Manochehr Mottaki, told reporters after the meetings.

Suleiman was greeted by a standing ovation from lawmakers and visiting dignitaries, as he arrived to be sworn in as the country's president.

Celebratory gunfire reverberated across the capital as news of Suleiman's election was announced, and hundreds broke out in cheers and dancing in the main square as they watched the vote on a giant screen.

The Hezbollah-led opposition and Western-backed government agreed last week to elect Suleiman as part of their deal to end an 18-month political crisis.

The presidential vote had been postponed 19 times since November when the last president, Emile Lahoud, left office.

He won 118 votes of the 127 living members of the legislature, according to parliament speaker Nabih Berri.

There were six blank ballots.

Two legislators voted for one-time presidential hopefuls and one was in the name "Rafik Hariri and the martyred legislators" - a reference to the slain former prime minister and five other lawmakers killed in bombings in the last three years.

After the vote, the new president was sworn in.

In his first speech, Suleiman had words to comfort both the Hezbollah-led opposition and the Western-backed government.

Suleiman called for a close relationship with neighbouring Syria, a major state supporter of Hezbollah which dominated Lebanon for almost three decades.

But he also backed the international tribunal to try killers of former Prime Minister Rafik Hariri, a position aligned with the government's.

The Arab-mediated agreement reached on Wednesday in Qatar ended a standoff that had paralyzed Lebanon's government before boiling over into some of the worst internal violence since the 1975-1990 civil war.

Though the deal was a major victory for Hezbollah, most Lebanese appeared happy that the shadow of war had been lifted, at least for now.

Suleiman's election is expected to add to political stability - he has pledged to strengthen "reconciliation and understanding" among rival factions.