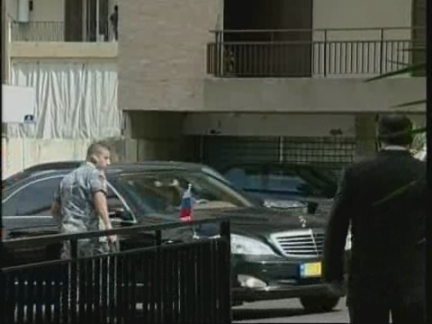 "We discussed the international tribunal and other internal affairs. We agreed on the continuation of national dialogue, a dialogue of all the problems in Lebanon, because dialogue is the only way to save the national consensus and unity."

"Russia will take all necessary action to help and support in finding a solution to the problem."

Envoys from Russia and the UN were involved in Beirut on Tuesday in what may be a last-ditch attempt to win approval from Lebanon's opposing camps for an international tribunal into the assassination of Lebanon's prime minister, Rafik Hariri, a subject that's divided Lebanese opinion and which threatens the country's stability.

The parliament has put off approving a draft agreement with the United Nations, paralyzed by a political crisis between the government, which wants a multi-national tribunal to prosecute suspects in the 2005 assassination, and the Hezbollah-led opposition, which wants more discussion first.

The Western-backed government of Prime Minister Fuad Saniora and the parliamentary majority have asked the United Nations to impose the Hariri tribunal and bypass the Lebanese legislature but opposition leaders have warned that such intervention could spell more trouble for the country.

Clashes over the issue have already caused nine deaths.

Opposition campaigners have been camping outside Saniora's office since December, 2006, paralyzing large parts of the capital's commercial district to demand his resignation but Saniora has refused to step down.

Sultanov said that Russia was eager to help find a compromise, not impose a solution, stressing that the Lebanese need to find consensus through dialogue.

"We discussed the international tribunal," he said. "We agreed upon the continuation of the national dialogue, a dialogue of all the problems in Lebanon, because dialogue is the only way to save the national consensus and unity."

Fawzi Salloukh, who resigned as Lebanon's foreign minister, said that Russia would do what is necessary to help and support in finding a solution to the problem.

Russia, with a veto on UN Security Council resolutions, has enjoyed good relations with Lebanon and Syria, which has been widely accused of involvement in the assassination.

Sultanov also met with Lebanon's President Emile Lahoud, Prime Minister Fuad Saniora and Parliament Speaker Nabih Berri. He is then expected to travel to Syria, which remains an important player despite the withdrawal of its army from Lebanon in the wake of Hariri's assassination.

Along with Sultanov, the top UN legal chief Nicolas Michel was flying in later Tuesday to Beirut to help overcome the impasse.

UN Secretary-General Ban Ki-moon, is scheduled to visit Syria next week, after a trip to Lebanon in March.

The anti-Syrian majority in Parliament blames Damascus for killing Hariri, an accusation Syria vehemently denies, and say the Syrians were using their Lebanese allies to undermine the formation of the tribunal.