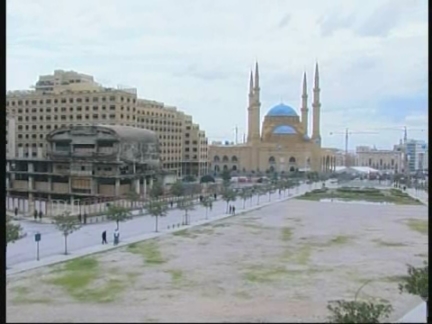 1. Pan on downtown Beirut with Al Amine mosque in the background

2. Crowd gathering at the Martyrs' square

4. Arrival of MP Bahia Hariri, sister of Rafik Hariri, at his grave

Hundreds of thousands of Lebanese waving flags, some carrying anti-Syrian banners, massed in Martyr's square in Beirut on Tuesday to commemorate the first anniversary of the assassination of former Premier Rafik Hariri.

The gathering answered a call by groups opposed to Syrian involvement in lebanon aiming to show their popular strength amid deep political divisions.

Rafik Hariri's sister Bahia Hariri prayed at his graveside next to the square.

Outside some demonstrators carried signs calling for "The Truth" and shouted the name of Hariri's son and political heir, Saad Hariri, whilst others carried placards critical of Syria and its president, Bashar Assad.

Thousands of troops and policemen, backed by armoured vehicles, sealed off Beirut's downtown area to provide security and guarded approaches to the city.

The government gave schools the day off and businesses closed.

The demonstration was expected to climax shortly after midday - the time when a huge truck bomb exploded on a downtown seaside street as his motorcade drove by a year ago, killing him and 20 others.

The main pro-Syrian Shiite Muslim groups, Hezbollah and Amal, were not taking part in the demonstration, which was expected to be largely dominated by Sunni Muslims from Hariri's sect and by Christian and Druse allies.

Amal is holding its own commemoration later Tuesday in southern Lebanon. Amal and Hezbollah, who are represented in the Cabinet, have been locked in a power struggle with the government's majority led by the Saad Hariri bloc.

The groups leading Tuesday's rallies in Beirut are looking for a repetition of a March 14 protest in which about one (m) million flag-waving Lebanese converged on Martyrs' Square to demand the Syrian army leave Lebanon.

The groups have continued to accuse Syria of interfering in Lebanese affairs and carrying out a campaign of bombings and assassinations in the last year that has killed other 11 people, including three prominent anti-Syrians.

Damascus has also denied involvement in these attacks.

Before the troop pullout, Syria had dominated Lebanon with its army and security services for nearly three decades, first entering in 1976 to quell a fratricidal civil war that did not end until 1990.

"I do not care who will win. What I do care about is keeping the calm situation in the country and being able to go to work safely."

A moderate politician and billionaire businessman with close ties to Syria emerged Monday as a candidate favoured by Hezbollah to head Lebanon's next government.

Lawmaker Najib Mikati, who served briefly as premier in 2005, announced he is seeking the post as a candidate of "moderation and accord" in formal talks starting Monday to choose a new prime minister.

Lebanon is in the midst of a political crisis nearly two weeks after the Shiite militant group Hezbollah brought down the country's unity government, headed by Western-backed Prime Minister Saad Hariri.

Hariri said Monday he won't take part in any government headed by a Hezbollah-backed candidate.

Hariri made the announcement Monday as President Michel Suleiman began two days of consultations with lawmakers over their choice of premier.

Many fear Hezbollah will react violently if its members are indicted, as is widely expected.

Ministers from the Syria- and Iran-backed Hezbollah and its allies walked out of the government, forcing its collapse, after Hariri refused to disown the court which Hezbollah says lacks credibility.

Mikati, a Harvard graduate, is seen as a relatively neutral figure who enjoys good relations with Syrian President Bashar Assad and also with the pro-Western Hariri.

Mikati's candidacy brings Hezbollah and its allies closer to getting enough support to form a government on their own.

He is a founder of Mikati Communications Group, which includes Investcom, a leading Middle Eastern mobile phone company that has interests in Yemen, Syria and Cyprus.

The support of at least 65 lawmakers is required to form a government in Lebanon's 128-seat Parliament.