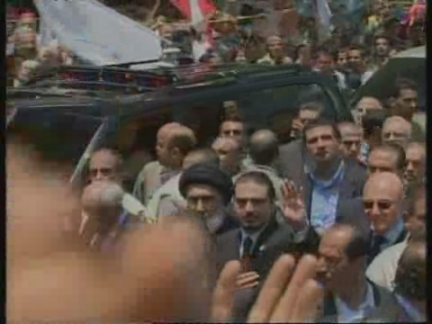 2. Mid of banner with image of Walid Eido and his son

4. Wide of men walking along in funeral procession

5. Mid of Walid Jumblatt, Druse politician walking along in procession

"Somebody is trying to say that neither the international tribunal nor anything else can secure the Lebanese or their leaders. We will keep resisting and we will face this series of terrorist acts."

10. Jumblatt and other politicians shaking hands with officials inside mosque

11. Wide of crowd outside mosque

12. Tilt-up from coffins to men praying inside mosque

13. Wide pan across crowd outside mosque

15. Spiritual leader of Lebanon's Sunni Muslim, Grand Mufti of the Republic Sheik Mohammed Rashid Kabbani leading prayers with Saad Hariri next to him and other men praying

19. Coffins being carried out of mosque

20. Zoom out from poster of Walid Eido and his son to wide of crowd outside mosque

Beirut on Thursday mourned the victims of a powerful car bombing that killed a prominent anti-Syrian legislator and nine other people as the government, reeling from another blow targeting its supporters, sought international help.

Prime Minister Fuad Saniora has called for an emergency meeting of Arab foreign ministers and the international community to assist in the investigation of Walid Eido's assassination near a popular waterfront promenade in Beirut.

The bomb ripped through his car on Wednesday as he drove from a seaside sports club, also killing his 35-year-old son, two bodyguards and six passers-by.

On Thursday the bodies of Eido and his son were slowly being taken in ambulances from the American University Hospital in West Beirut to the Verdun neighbourhood where the slain politician lived.

The funeral procession went through the main thoroughfare of Corniche Mazraa in the Muslim sector, where pictures of the slain politicians were posted on walls and overpasses.

Thousands of mourners gathered on the streets, waving Lebanese flags, those of the Hariri Future movement and banners of various Sunni factions.

"Somebody is trying to say that neither the international tribunal nor anything else can secure the Lebanese or their leaders. We will keep resisting and we will face this series of terrorist acts," Ghazi Aridi, the Lebanese information minister said.

Thursday's funeral procession swelled to tens of thousands escorting the coffins to a mosque at the Shohada Cemetery several kilometres (miles) away for a prayer service and internment.

Saad Hariri, leader of the anti-Syrian majority bloc in parliament to which Eido belonged to, Druse politician Walid Jumblatt and other prominent anti-Syrian leaders also marched in the procession.

At the mosque, male relatives sobbed and bent to kiss the coffins laid next to one another.

The spiritual leader of Lebanon's Sunni Muslim, Grand Mufti of the Republic Sheik Mohammed Rashid Kabbani led the prayers, with Saad Hariri at his side.

The blast that killed Eido was a new blow to the stability of this conflict-torn nation.

It came just three days after the government, together with the United Nations, started putting together an international tribunal ordered by the UN Security Council to try suspects in the killing of former Lebanese Prime Minister Rafik Hariri in Beirut two years ago, a move strongly opposed by Syria and its allies in Lebanon.

Eido was a prominent supporter of the tribunal, a staunch follower of Hariri and the seventh anti-Syrian figure killed in Lebanon in the past two years.

Many in Lebanon have accused Syria of being behind the slayings, a claim Damascus denies.

Syria controlled Lebanon for 29 years until it was forced out after Hariri's assassination, and its Lebanese opponents believe it is seeking to regain domination by plunging the country into chaos.

Businesses, schools and government offices were closed on Thursday after the government declared a day of national mourning.

The killings were likely to further enflame Lebanon's bitter power struggle between Saniora's Western-backed government and its Syrian-backed opponents, led by the Hezbollah militant group.

Many fear the violence could push the polarised nation, with a fragile balance of ethnic and religious groups, into a new civil war.