4. Tilt down of newspapers

"The whole country is on the brink of the abyss, salaries are down and the government could collapse. What a country!"

"Today the country is subject to some developments, it is targeted by the indictment and the Tribunal which is politically biased. There was an Arab endeavour, we gave it a chance and we dealt with it positively. Because of the American intervention and because the other party (referring to Prime Minister Hariri and his group) was not able to overcome the American pressure, this endeavour was inactive. Today it is necessary for the Lebanese and through the constitutional institutions to confront these obstacles and to find a solution."

The Islamic militant group Hezbollah and its allies plan to resign from the Lebanese Cabinet and topple the government on Wednesday, over tensions stemming from the international investigation of the 2005 assassination of former Prime Minister Rafik Hariri, officials said.

The ministers were planning to resign in the afternoon, unless Western-backed Prime Minister Saad Hariri, the son of the murdered leader, agrees to their demand to convene an urgent Cabinet meeting over the crisis, which relates to the Special Tribunal of Lebanon which is investigating Rafik Hariri's assassination.

The announcement was made by Lebanon's Health Minister Mohammed, speaking on Hezbollah's Al-Manar TV.

Hezbollah has denounced the tribunal as an "Israeli project" and urged Hariri to reject any findings by the court, which has not yet announced any indictments.

But the prime minister has refused to break cooperation with the tribunal.

Another official allied to Hezbollah confirmed the resignation plan, which calls for Hezbollah and its allies to step down along with one more minister who would tip the balance and force the government to fall.

Hariri, whose coalition has been sharing power with the Iranian-backed militant group, was to meet on Wednesday with President Barack Obama in Washington to discuss the crisis.

The UN-backed Special Tribunal of Lebanon which is investigating the elder Hariri's killing is widely expected to name members of the Hezbollah in upcoming indictments, which many fear could re-ignite hostilities between Lebanon's rival Shiite and Sunni Muslims.

To bring down the government, Hezbollah needs the backing of more than a third of the ministers.

Hezbollah and its allies have 10 ministers in the 30-member Cabinet, and an official close to Hezbollah said an 11th minister close to President Michel Suleiman would also submit his resignation.

Hariri's office had no immediate comment on the resignation plans, but referred to his earlier statement late Tuesday that said: "We will use all possible means to keep channels open to all the Lebanese to reach solutions that guarantee stability and calm and preserve national unity."

Violence has been a major concern as tensions rise in Lebanon, where Shiites, Sunnis and Christians each make up about a third of the country's four million people. In 2008, sectarian clashes killed 81 people and nearly plunged Lebanon into another civil war.

Hariri's assassination in a suicide bombing that killed 22 other people both stunned and polarised Lebanese.

He was a Sunni who was a hero to his own community and backed by many Christians who sympathised with his efforts in the last few months of his life to reduce Syrian influence in the country.

A string of assassinations of anti-Syrian politicians and public figures followed, which UN investigators have said may have been connected to the Hariri killing.

The Netherlands-based tribunal has not said who it will indict, but Hezbollah leader Sheik Hassan Nasrallah has said he has information that members of his group will be named.

Hezbollah denied any role in the assassination and denounced the court as a conspiracy against it.

On Tuesday, officials announced that a diplomatic push by Syria and Saudi Arabia had failed to reach a deal to ease political tensions in Lebanon.

There had been few details about the direction of the Syrian-Saudi initiative, but the talks were lauded as a potential Arab breakthrough, rather than a solution offered by Western powers.

Hezbollah Cabinet Minister Mohammed Fneish said on Tuesday the initiative was done in by "American intervention and because the other party was not able to overcome the American pressure."

The collapse prompted on Wednesday's push for an emergency Cabinet meeting, even though Hariri was out of the country and planning to meet Obama. 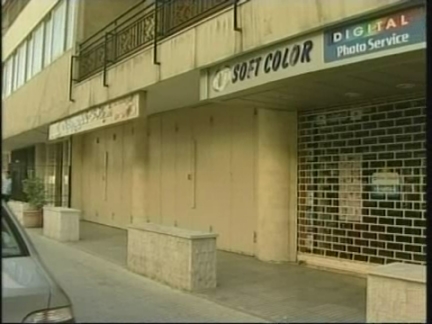 "The assassination obviously left a negative impact on Lebanese politics and in return will have definitely an impact on the economic condition of Lebanon. Of course Lebanon coming out of a difficult war and we have a lot of heavy burden of debts when we are going towards Paris 3 to get funding and I think this will have an impact on the funding of the Lebanese government."

11. Various of a demonstration in Martyrs' square

13. Various of a demonstrators lighting a candles

14. Poster of the late Pierre Gemayel

15. Banner reading (English) "We are hostages of Iran, Syria and Israel"

"We are here today to assert that we are going to continue till the end by having an international court."

Business leaders hit Lebanon with a strike on Friday to demand that leaders find a resolution to the country's political crisis, fearing that it could spiral into violence after the slaying of a Christian leader.

With tension running high a day after a massive demonstration outside the funeral of Industry Minister Pierre Gemayel, factories, banks and financial

Though many small shops remained open Friday, many schools kept their doors closed and traffic was thinner than normal on Beirut's usually bustling streets.

The two-day strike "was to raise the voice against this crime," a statement from the business leaders said.

It called on government and its opponents to break the political deadlock and urged the Cabinet and Parliament to "take national decisions ... engage in dialogue and stop making threats of street protests."

The strike reflected fears that Lebanon's political crisis could throw the country into turmoil.

"The assassination obviously left negative impact on Lebanese politics and in return will have definitely on the economic condition of Lebanon," said one economist AP Television spoke to.

Lebanon is sharply divided between anti-Syrian Christians and Sunni Muslims, who dominate the parliament and government, and pro-Syrian Shiite Muslims, who are led by the powerful Hezbollah guerrilla group and are demanding more power.

On Thursday, an estimated 800-thousand people, flooded into downtown Beirut for Gemayel's funeral and vented their anger against Syria, which many blame in the assassination.

They vowed their support for the US-backed government and vowed to oust Lebanon's pro-Syrian president, Emile Lahoud.

But Hezbollah and its allies have threatened their own campaign of street protests to bring down the government of Prime Minister Fuad Saniora unless it is changed to give them more power.

international tribunal to try suspects in the 2005 assassination of former Prime Minister Rafik Hariri; a highly divisive issue because Syrian officials have been implicated in the murder.

"We are here today to assert that we are going to continue till the end by having an international court," said one demonstrator AP Television spoke to at a demonstration in martyr square on Friday.

Damascus has denied it had anything to do with the murder. 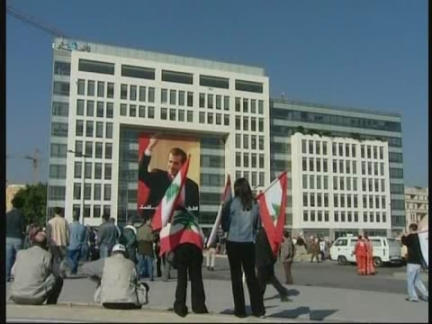 1. 'An-Nahar' newspaper building with big poster of Gibran Tueni on side

2. Close up on poster

7. Various of security forces on the streets

"We ask for a firm decision about the Syrians and we call to impose sanctions on them and even change the regime. This regime looks very criminal, we cannot reach an understanding with them."

11. Various of mourning signs in Sassine Place in Ashrafieh (area of Beirut which Tueni represented in parliament), pictures of Tueni and Lebanese flags

12. Cars driving through the street with Tueni posters, part of funeral procession

13. Various of funeral procession, coffins (of Tueni and his two bodyguards) draped in Lebanese flags being taken through Sassine

"We call on the international community to stop these terrorist operations, these crimes and these assassinations that are being carried out by totalitarian regimes, by dictatorial and oppressive regimes."

The mass turn-out demonstrated the level of anger felt towards Syria, which has been blamed for the Monday car bombing which killed Tueni.

A general strike called in mourning for Tueni was widely respected with banks, businesses and schools closing their doors for the day.

Hundreds of Lebanese troops and police took up position in a central square where, on March 14, about a million people heard Tueni call for the withdrawal of Syrian forces from Lebanon.

An outspoken critic of Syria, Tueni was killed by a car bomb on Monday as he was being driven to work through an industrial suburb of Beirut.

The 48-year old was the fourth anti-Syrian figure to be killed since February.

The series of bombings began with the assassination of former Prime Minister Rafik Hariri, who was killed in a truck bombing.

A previously unknown group has claimed responsibility for the blast that killed Tueni and two bodyguards, and wounded 30 other people.

But Tueni's colleagues and political allies have blamed Syria, which has denied involvement.

In the Beirut district of Ashrafieh, which Tueni represented in parliament, several thousand people marched behind his coffin and those of his bodyguards.

Others waited outside An-Nahar's offices in the city centre, where a giant portrait of Tueni hung down the side of the building.

Many shouted slogans against Syria and its President Bashar Assad.

The strike that anti-Syrian groups had called in mourning for Tueni was observed not only in Beirut, but also in the southern provincial capital of Sidon and in the mountains of central Lebanon.

But in eastern Lebanon, where pro-Syrian groups are dominant, the strike call was ignored.

Opponents of Syrian influence in Lebanon are counting on the public anger over Tueni's killing to bolster their cause and close ranks in the face of what they see as a Syrian threat to pick off their leaders one by one.

Meantime, on Tuesday the chief U.N. investigator into the Hariri assassination, German magistrate Detlev Mehlis, told the U.N. Security Council that the latest evidence strengthened his belief that Syrian and Lebanese intelligence officials were involved in the murder.

Mehlis had interviewed Tueni as a witness.

Hariri's death in February sparked mass protests and intensified international pressure which forced Syria to withdraw its army from Lebanon after nearly three decades of political and military control.

France circulated a resolution in the Security Council co-sponsored by Britain and the United States, which would broaden the scope of the U.N. investigation to include all the attacks in Lebanon since October 1, 2004.

The draft resolution seemed to deflect the Lebanese government's request for an inquiry into Tueni's killing and an international tribunal for the suspected killers of Hariri.