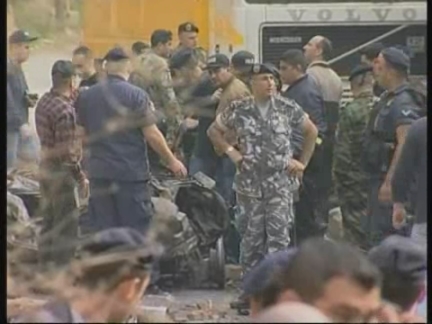 1. Various of car wreckage of Tueini

2. Various of aftermath of explosion

3. Wide exterior of the Grand Serail

"This hideous crime occurs while Judge Detlev Mehlis presents his report, with whatever indications and significance it has especially after what has been recently said as declarations and threats that are very clear."

"Actually I think Lebanon's enemies are responsible for all these explosions that are happening nowadays. No matter how the relationship between Syria and Lebanon is, or what in JebranTueni's attitude towards Syria was and what he announced. Syria condemns the killing of Gobrin Tueni, Syria totally refuses these charges because it is against Syrian policy and manners."

Lebanese Prime Minister Fuad Saniora said Monday he will ask the United Nations to set up a new inquiry into anti-Syrian journalist and MP Gibran Tueni's slaying and previous bombings and to create an international tribunal to try suspects in the Hariri assassination.

"The criminals continue to kill us one after the other. We will not surrender whatever is the price," Saniora said.

A previously unknown group, "Strugglers for the unity and freedom in the Levant," claimed responsibility for the blast, but many quickly implicated Damascus in the slaying.

The statement's authenticity could not be independently confirmed.

The bombing came the day that the U.N. Security Council received a U.N. inquiry's report into the assassination of former Lebanese Prime Minister Rafik Hariri.

New evidence has only reinforced investigators' belief that the Syrian and Lebanese intelligence services were likely involved in the assassination of Lebanon's former prime minister, a U.N. probe said in the new report Monday.

The 25-page report from German prosecutor Detlev Mehlis' team again accused Syria of trying to obstruct his probe when it demanded that he revise his findings after a crucial witness recanted his testimony.

Mehlis will brief the council on Tuesday.

Meanwhile, in the Christian quarter of Ashrafieh, Tueni's constituency, orthodox churches tolled their bells. Dozens of Tueni supporters held a sit-in to mark the death of the lawmaker.

Police said Tueni was one of three people killed when a car bomb exploded as his motorcade drove through the hilly industrial suburb of Mkalles.

The others were his driver and an unidentified passerby. Another 30 people were wounded in the bombing, which started a fire that destroyed at least 10 vehicles.

Tueni, 48, who had championed the U.N. investigation into Hariri's killing, had returned only Sunday from France, where he had been staying periodically for fear of assassination.

The U.N. inquiry reported in October that Syrian and Lebanese intelligence officials were implicated in Hariri's death.

Syrian Information Minister Mehdi Dakhlallah denied his government was involved in the killing.

After Hariri's death, Tueni played a prominent role in the leadership of the mass demonstrations that, combined with international pressure, succeeded in forcing Syria to withdraw its troops from Lebanon in April, ending a 29-year presence in the country.