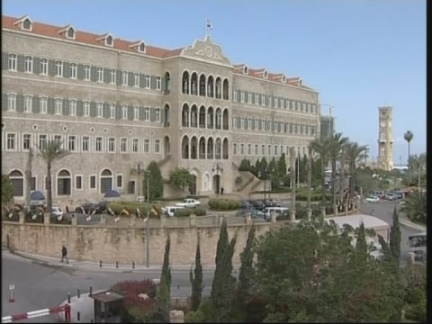 11. Merkel and Berri inside meeting room

13. Close up of Merkel to pull of Merkel and German officials

17. Various of meeting Pelosi and Hariri during the meeting

19. Mid of Hariri with a poster for his father

"The purpose of the trip is part of our responsibility for the national security of the United States. We are here to see how we can make the world safer and to fight terrorism. Important to that is to establish the facts and be current on them."

24. Pelosi handling the Quran and leaving the palace

26. Pelosi and Saniora greeted by the honour guards

27. Various of meeting with Pelosi and Saniora

German Chancellor Angela Merkel arrived in Beirut on Monday for talks with Lebanese leaders and to inspect a German naval task force serving with a U.N. peacekeeping force in Lebanon.

Merkel, whose country currently holds the rotating presidency of the European Union, was met by Prime Minister Fuad Saniora at Beirut airport.

She held talks with the Western-backed Saniora, and the Parliament Speaker and Amal leader Nabih Berri, who is a leading member of the Hezbollah-led opposition which is seeking to remove Saniora from office.

Merkel also planned to visit a German navy ship in Beirut's harbour during her one-day trip to Lebanon.

The Germans lead a naval task force of about 1,700 men and women who are patrolling the Lebanese coastline to prevent weapons from being smuggled to Hezbollah in accordance with a U.N. resolution that ended the summer war Lebanon and Israel.

The naval task force is attached to the U.N. Interim Force in Lebanon. (UNIFIL), numbering a total of about 13-thousand, and is deployed along the border with Israel.

Merkel has made the Middle East a top priority of her six-month EU presidency and is currently on a tour of the region. The Chancellor met Israeli and Palestinian leaders at the weekend.

The US House Speaker Nancy Pelosi was also in Beirut for talks with Lebanese officials as part of a fact-finding trip to the Middle East that has drawn criticism from the White House because it includes a visit to Syria.

"We are here to see how we can make the world safer and to fight terrorism," she added.

Pelosi's visit to Lebanon comes amid sharp political divisions in the country between the government and the opposition.

The U.S.-backed Saniora faces an opposition campaign to unseat him, with protesters camped out in downtown Beirut demanding his resignation.

Pelosi also met with Saad Hariri, who has been pushing for international support for the creation of an international tribunal to try suspects in his father's February 2005 assassination, which he blames on Syria.

"We will be talking also of course then about the tribunal, which is very important to establish the truth so we can go forward," she said.

The Syrians have denied involvement, but their opponents in Lebanon say they are working hard to undermine the court through their allies in this country.

Pelosi's trip has drawn criticism from the White House because of a planned stop in Syria on Wednesday.

The US House Speaker said the trip to Syria was aimed at seeing what Damascus could do to help the fight against terrorism.

The White House called her Syria visit last week a "bad decision" because the administration considers the country a supporter of terrorism.

Her trip comes as the Democratic majority in Congress is locked in a battle with President George W. Bush over strategy in Iraq.