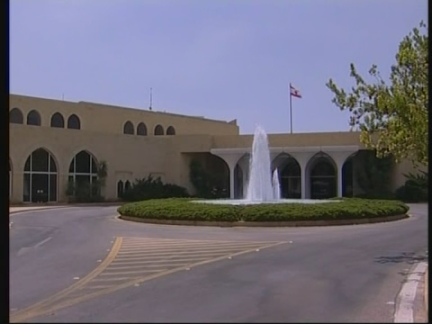 3. Close-up of Lavrov, pull out to wide

"All of UN resolution 1701 should be implemented. The sea and air blockade should be lifted over Lebanon and the Lebanese army should be deployed in the south along with the UNIFIL troops and of course the two Israeli detainees should be freed."

As part of the continuing diplomatic efforts to consolidate the ceasefire between Lebanon's Hezbollah guerrillas and Israeli forces, the Russian Foreign Minister arrived in Beirut on Thursday to meet Lebanese officials.

Sergey Lavrov said after talks with Lebanese Prime Minister Fouad Saniora that each part of UN resolution 1701 must be implemented, referring to the resolution that ended 34 days of fighting between the two sides on August 14 (2006).

"The sea and air blockade should be lifted over Lebanon and the Lebanese army should be deployed in the south along with the UNIFIL troops and of course the two Israeli detainees should be freed," he said.

Afterwards he said there must a comprehensive settlement in the Middle East and an international conference would help achieve this.

Lavrov's visit comes after Israel announced that it would lift an air and sea blockade on the country by Thursday evening.

Israel had come under international pressure to lift its embargo, which had threatened to derail efforts to implement the UN resolution.

The embargo, which business leaders have said cost the country about 50 (m) million US dollars per day, was also hampering massive rebuilding efforts.

The lifting of the embargo marked a major victory for UN Secretary General Kofi Annan and it showed that with UN mediation, some of the outstanding disagreements might be resolved.

Meanwhile, the U.N. Undersecretary General for Legal Affairs also arrived in the country late on Wednesday to advance efforts to formulate an international tribunal to investigate the assassination of former Lebanese Prime Minister Rafik Hariri.

Nicolas Michel said he was in Lebanon to meet top Lebanese judicial and political officials at the request of Annan.

He said he hoped to be able to make progress in agreeing a legal basis for the establishment of a tribunal.

On Thursday he presented a final UN draft on the tribunal to Lebanese Justice Minister Charles Rizk.