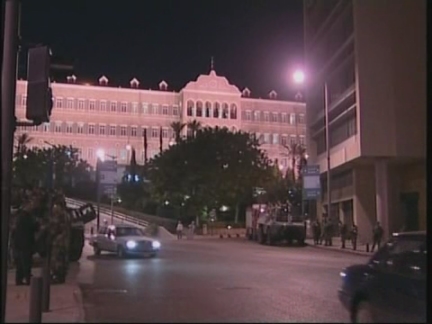 9. Various of cabinet ministers around table

The Lebanese government on Saturday approved an international tribunal for suspects in the 2005 assassination of former prime minister Rafik Hariri, despite warnings of mass protests by its opponent Hezbollah.

Last-ditch attempts to reach a compromise between the government and the pro-Syrian camp, led by Hezbollah, appeared to fail as the cabinet moved forward with its meeting for a UN created court.

The tribunal is a key bone of contention in the power struggle between allies and opponents of Syria in Lebanon.

Anti-Syrian forces - mainly Christian and Sunni Muslim - dominate the government, but are facing a campaign by the mainly Shiite pro-Syrian camp to bring the government down.

The political crisis became potentially explosive this week with the assassination of an anti-Syrian politician, raising worries of more violence that could tear apart the country's fragile sectarian seams.

The anti-Syrian bloc brought out some 800,000 people for a mass rally at the funeral of the politician, Pierre Gemayel, on Thursday.

Hezbollah has shown it can bring out similar numbers for its protests - and if it goes ahead with its threatened demonstrations, many fear it could start a spiral of street action.

Earlier on Saturday, two key anti-Syrian Lebanese politicians met with Parliament Speaker Nabih Berri, an ally of Hezbollah and a Syria supporter, in an apparent attempt to find a compromise.

Hezbollah demands that the government be changed to give it and its allies more power, or else it says it will launch mass protests to topple Saniora.

But the reconciliation bid appeared to have failed, and the Cabinet meeting approved a UN draft for the tribunal.

In the eyes of Hezbollah, the approval of the tribunal amounts to a rejection of its demands for a greater representation in the Cabinet.

The Shiite militant group and Lebanon's pro-Syrian president, Emile Lahoud, have denounced the current government as unconstitutional, because the constitution underlines that the government must represent all of Lebanon's main communities.

Aridi's statement went on to say that Prime Minister Saniora insisted the approval of the tribunal was not meant as a provocation against Hezbollah and its allies.

For opponents of Syria, the court is a major priority, and they hope it will uncover the truth behind the February 2005 assassination of Hariri in a massive bomb blast that killed 22 others, which they accuse Damascus of orchestrating. Syria has denied any role in the killing.

The court, which will sit outside Lebanon and have a majority of non-Lebanese judges, is to try four Lebanese generals - top pro-Syrian security chiefs under Lahoud including his Presidential Guard commander, who have been under arrest for 14 months, accused of involvement in

The UN investigation into Hariri's death has also implicated Brigadier General Assaf Shawkat, Syria's military intelligence chief and the brother-in-law of Syrian President Bashar Assad. But Shawkat is not in custody.

Hariri's death was the first in a string of attacks that killed five other prominent anti-Syrian figures - with Gemayel the most recent, in a bold daytime shooting on Tuesday.

Many Lebanese blame Syria in all the killings, which Damascus denies.

Since Gemayel's assassination, some ministers in Saniora's Cabinet have moved into the heavily guarded prime minister's building in downtown Beirut, fearing more slayings.