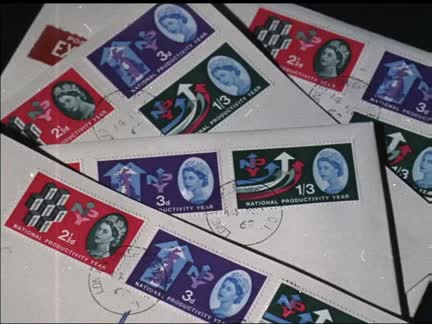 CUTS FOR STORY NUMBER 86452 - COLOUR VERY GOOD - Various shots wedding of Princess Alexandra and Mr Angus Ogilvy at Westminster Abbey. VS people camping out around Abbey. Shots of people reading newspapers, young man uses electric razor, woman in blue anorak slices open a roll and spreads it with butter. Her anorak has a New Zealand badge and the butter is New Zealand butter. MS of four women in sleeping bags waking up. CU group of women reading newspaper. Another young woman has a transistor radio. Hot drinks being poured from a thermos. CU woman sleeping with head on handbag - she wakes up. CUs girls smiling and waving as royals pass. VS crowds as cars pass. Man in bowler hat takes a photograph. Flags are waved. VS of motorcade. LS London buses and traffic. Parade passing by. Policemen move black and white traffic bollard. CUs girls waving. CU children waving Union Jack flags. VS of the parade - horse guards. LS cars driving down the Mall - crowds either side. VS of crowds. Queen's car is seen briefly. Royal carriage passes crowds. VS motorcade. Crowds dispersing. CU of smartly dressed woman speaking to traffic policeman. CU briefcase and tins which people are standing on. VS crowds. VS of the royals being driven through crowds. Gates are closed behind the cars. VS carriage with married couple waving to crowd. Various shots people sitting and standing at the side of the road. Various shots people watching the parade - some use mirrors and periscopes. MS women waving their flags.