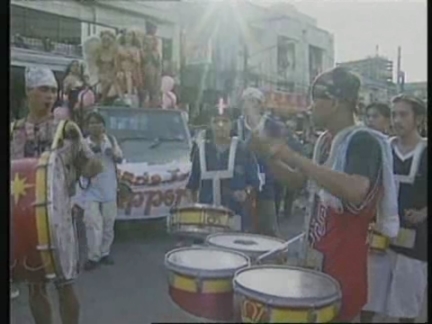 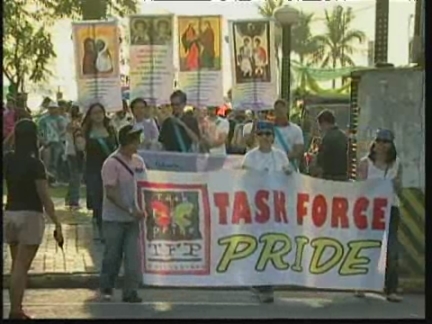 4. Wide of Malate church then pan down to gay parade

"We are celebrating human rights week and part of the human rights week is the LGBT (lesbian, gay, bisexual and transgender) rights where we are pushing for the recognition of sexual orientation and gender identities..."

"...so we are her to celebrate our rights and freedom and to have fun."

10. Wide of on-lookers watching the parade

11. Gay participants dancing on a float

The gay and lesbian community came out in force in Manila's Malate tourist district on Saturday to hold a gay pride parade.

Around two hundred lesbian, gay, bisexual and transgender youths filled the streets, calling for an end to discrimination, ahead of Human Rights week.

They carried placards demanding equal rights, and dressed up in colourful costumes.

One participant, Eva Callueng said the parade was important to the gay community.

"We are celebrating human rights week and part of human rights week is the LGBT (lesbian, gay, bisexual and transgender) rights where we are pushing for the recognition of sexual orientation and gender identities so we are her to celebrate our rights and freedom and to have fun" she told AP Television.

Police who guarded the march said it was peaceful and ended without any incident.