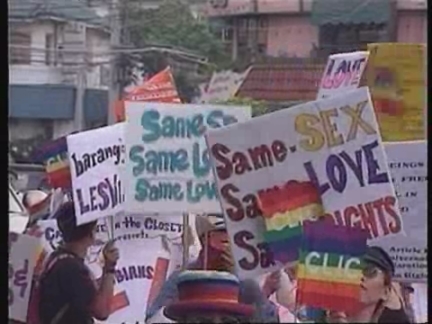 Hundreds of gay and lesbian Filipinos were joined by their supporters when they marched through the streets of the capital Manila in celebration of gay pride month.

Wearing colourful costumes and holding placards, they danced and paraded to push for the recognition of the gay community and to end discrimination.

The placard says it all.

The gay and lesbian community in the Philippines sees nothing wrong with love between people of the same sex.

This was the message of a colourful parade in Manila on Saturday.

More controversially they want to promote same-sex marriage in this predominantly Catholic nation, where it is considered very much a taboo.

Hundreds of Filipino gays and lesbians joined by their supporters - some from as far away as Europe and the United States - got together for the festive affair.

Wearing colourful and unique costumes, they managed to draw the attention of many onlookers.

Participants in this march say there is nothing wrong with people from the so-called third sex.

They hope the march will give them greater recognition and end some of the discrimination against gays in the Philippines.

This parade is held every year in June, as the gay and lesbian community around the world celebrate gay pride month.

7. Close up of three gays dancing

16. Tight shot of dancing feet, pan up to back of gay dance, zoom out wide