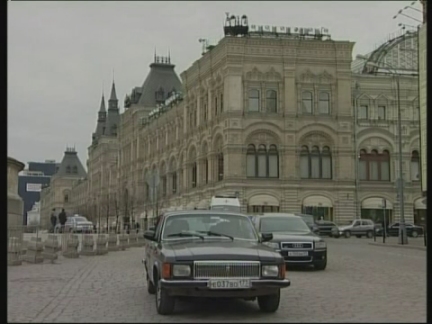 The countdown to the UEFA Champions League final at the Luzhniki Stadium in Moscow on 21 May gathered further impetus when the trophy was handed over in a ceremony in the Russian capital on Thursday (3 April).

Yuri Luzhkov, the Mayor of Moscow, took responsibility for the European Cup which was presented to him by the President of UEFA, Michelle Platini.

The trophy will travel to five Russian football cities before returning to Moscow for the Champions Festival in Red Square ahead of the game.

The UEFA Champions League final will be staged at the Luzhniki Stadium in Moscow, and as part of the build up to the event, the European Cup arrived in the Russian capital on Thursday.

In a ceremony at the GUM centre in Moscow's Red Square, the 2007 champions, AC Milan, handed the UEFA Champions League trophy back to UEFA President Michel Platini.

He then presented the trophy to the Mayor of Moscow, Yuri Luzhkov, for the city to keep and display to the public until the final on 21 May.

Also in attendance were Rinat Dasaev, the former USSR goalkeeper who made his name with Spartak Moscow, and the president of the host association, the Football Union of Russia, Vitaly Mutko.

Since 1997, the previous season's champions have formally returned the UEFA Champions League trophy to UEFA at a special ceremony, with the cup then given to the host city to be showcased until the final.

"A fantastic and a very emotional game will take place at our great five stars stadium Luzhniki. There will be a fight for this wonderful prize."

It will return to Moscow for the Champions Festival in Red Square ahead of the game.

A celebration party will also enhance the excitement on the eve of the final at the Luzhniki Stadium.

"For us it's a big day today because we have an opportunity to launch the final in Moscow. It's a great stadium with great teams. We know about the hard work done by the Russian authorities and we know that small problems remain."

The short tour of the trophy is expected to bring Russians closer to the competition, set the tone for the final, and to offer local fans the opportunity to get close to the iconic club football prize.

The trophy will be exhibited at venues chosen by the municipal authorities.

Admission will be free for the public, and visitors will have the chance to have their photo taken with the silverware.

3. 00:10 Leonardo (left) and Umberto Gandini from AC Milan taking the European Cup to the stage

8. 00:58 Luzhkov receiving the trophy from the President of UEFA, Michelle Platini

RESTRICTIONS: SNTV clients only. Scheduled news programmes only. Use within 14 days. If interested in archive use after 14 days please contact www.aparchive.com . Internet use only for SNTV clients with digital rights licensed in their contract. For any questions regarding rights restrictions please contact planning@sntv.com

"Of course our goal is to win and become European champions. The favourites are Spain, Belgium, France and England - they have become very strong over the last two years in their qualification games. I am looking forward to a thrilling Euro."

Question: "Who are the favourites?"

"Of course there are favourites in each group - but this is only on paper, it's theory. The reality could be very different, there are six groups in total, Italy is one of the favourites, they are a very powerful team."

Question: "Will you do better than at the World Cup?"

"In sports we know you cannot always win. In Brazil we lost to Netherlands and Chile. Those things happen in sports. We are not fools - we don't think we are the best and that no one can defeat us. That's a good way to start."

3. 01:28 SOUNDBITE: (English) Roy Hodgson, England manager (asked about his expectations for the Euro):

"We expect to play well enough in the tournament to be able to hold our heads high and to be able to leave the tournament knowing that, as much as we were possibly capable of doing, we've not left anything undone or anything unprepared. We understand all of us, especially those of us who have been in football a long time, that we're not talking about a science, we're talking about a game, things happen in games which you can't always control. The one thing you can control in the team's performances. I shall be expecting the team to give good performances every time they go onto the field of play, that's my expectation. A more global expectation will come from left, right and centre and that's nothing that we can control, so we don't concern ourselves with it!"

++For the benefit of our Polish-speaking clients++

++For the benefit of our Swedish-speaking clients++

"It's not just leading out against England, it's leading them out into a major tournament. The first game is against Slovakia and that's we're concentrating on. Everybody is looking at the England game, Wales v England, it's a great game, it's going to be an unbelievable atmosphere - the Battle of Britain, so to speak. For us it's not just about that one game, it's about the three games, it's about getting the points, it's all about that. We've got to get enough points to get out of the group. First and foremost we've got to tackle Slovakia which will be a tough game but they'll know they're in a tough game as well. Out of ourselves, Russia and Slovakia it's not unthinkable to think that any of us can get out of the group. It's tough for all of us but it's do-able. The honour of leading Wales to a major tournament I can't describe to you how that feels and I can't wait for the moment to come round where we're walking onto the pitch, singing the national anthem, ready to play Slovakia."

"Of course there was disappointment when the draw was made and we all said so, because that's what we felt. We never thought Italy should have been in pot two for a start, they're a pot one side. But anyway, that's gone, be re-enthused, take those qualification games into consideration and take anything that you can lay your hands on in terms of motivation, go get yourself going. But I take your point, when things are really difficult, that's the time that we should get going. I know the players were disappointed with 2012, maybe try and use those experiences to have some sort of bearing on what might happen in June time for us."

"There's two things we have to do and one of them is to try and make an impact, we're in a very difficult group with the world champions (Germany) and Poland and Ukraine. But we've always done well I think when we've had to play again higher level - or perceived higher level - opposition, certainly bigger nations, and that's what we'll be aspiring to do in the tournament. We have to believe we can qualify from the group. We have to enjoy the experience of being here as well. I think it's very important for me as a coach at my first tournament, the players, whether they're younger players or players at the tail-end of their international career to enjoy the whole experience as well. Obviously if we compete and we aspire to get out of the group the sense of enjoyment will be greater and that's what we're aspiring to do."

With the 100 days countdown clock to UEFA 2016 ticking down to 99, the vast majority of the coaches of the 24 nations that will take the field at all over France assembled in Paris on Thursday (3rd March) as the build-up to European football's greatest international stage continues.

For the first time, 24 sides will contest the UEFA European Championship.

The inaugural final tournament in France in 1960 was a four-team affair, expanding to eight in 1980 and doubling in size again in 1996 to 16.

As hosts, France qualified automatically for a tournament which takes place between the 10th June and the 10th July 2016.

They will be joined by 23 qualifiers and the teams will be drawn into groups of four, with the six group winners, six group runners-up and the four best third-placed teams advancing to the round of 16 when it becomes a knockout competition.

The Henri Delauney Cup will be lifted by the winning nation's captain at the Stade de France in Paris on the 10th of July - Germany and Spain top the multiple winners' list with three, while France have triumphed twice.

The banned UEFA president Michel Platini - who lifted the trophy in 1984 - is the tournament's highest-ever scorer with nine goals from midfield.