1. Wide of a joint news conference by Toyota Motor Corp. and BMW management

"In future, the BMW group, and Toyota Motor Corporation, will work together in what is designed to be a long term technological partnership. By carrying out basic research together, we want to speed up the development of battery cell technologies."

"And we at Toyota are exploring possibilities across a full range of technologies. The battery technology that we will develop with BMW will be the core technology for both reducing and replacing petroleum fuel."

5. Pan from media to photo session

Auto giants Toyota and BMW said on Thursday they had agreed to collaborate on research for cleaner, next-generation batteries, underlining the growing push in the industry for green technology.

The agreement brings together Toyota Motor Corp., Japan's No. 1 carmaker and a leader in petrol-electric hybrids, and BMW AG of Germany, a European maker that has a strong luxury brand image in both Japan and Europe.

"In future, the BMW group, and Toyota Motor Corporation, will work together in what is designed to be a long term technological partnership," Klaus Draeger, Member of BMW AG, development board of management said.

The two automakers will also work on improving lithium-ion battery technology, typically used in batteries for electronic gadgets and relatively new to autos.

Toyota has struggled to find a good lithium-ion battery for its green cars and is using technology from Japanese electronics maker Sanyo Electric Co. in its latest plug-in hybrid, for which Toyota has recently started taking orders.

Toyota had worked with Panasonic Corp. on a battery before the electronics maker acquired Sanyo, partly to get better lithium-ion technology.

"And we at Toyota are exploring possibilities across a full range of technologies. The battery technology that we will develop with BMW will be the core technology for both reducing and replacing petroleum fuel," Toyota Executive Vice President Takeshi Uchiyamada told reporters at a Tokyo news conference.

Toyota and BMW have been engaged in extended discussions on technology and plan to collaborate on other medium-term and long-term projects, he said.

BMW will also begin supplying "clean" diesel engines to Toyota in 2014 for models for the European market.

Diesel engines for passenger cars are huge in Europe but have yet to take off in the U.S. or Japan, the two major markets where Toyota is strong.

Toyota does not have enough clean diesel engines for its European offerings.

Under their agreement, BMW is supplying 1.6 litre and 2.0 litre fuel-efficient diesel engines for Toyota.

They declined to give details on models.

The announcement was timed with the Tokyo Motor Show, which opens to the public on Saturday. 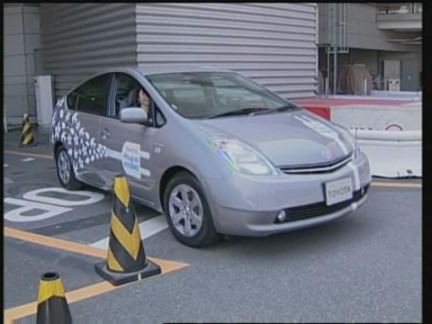 3. Wide pan shot of a man charging electric charger into the feeder

4. Pan shot of the side of car from the sign saying "plug-in hybrid" to the electric charging point

"Electric vehicles have some obstacles such as the initial cost, not very convenient charging spots available and the long time to charge the car in order to for them to be realistic at the moment. But, with this (Toyota's plug-in hybrid) technology, it will become easier to have eco vehicle. The users themselves can contribute to protecting the environment by charging their cars by themselves. Users themselves take part in using clean energy. We think this will become a trigger to change the current way we power cars "

7. Pan from ground to car driving through

9. Pan shot from traffic of the conventional cars to gas station

12. Back shot of sign saying Plug In Hybrid to Prius driving forward

Plug-in hybrids, including Toyota's, generally have batteries that power an electric motor, with an internal combustion engine for use when the batteries run low.

The batteries can be recharged by plugging them into a standard wall outlet.

The plug-ins run longer on electricity, especially for shorter distances, than the more common hybrids on the roads such as Toyota's Prius.

The Toyota Plug-in HV is a hybrid car that you can power up at home.

The latest eco-car unveiled by Toyota runs on the same nickel metal hydride battery as the Toyota Prius and has a cruising range of 8 miles (13 kilometres) on electricity, which is further than similar cars on the market like the Prius.

Toyota is the first manufacturer to receive government approval to conduct tests for a plug-in hybrid on Japanese public roads.

So far mass production of plug-ins is so far being held back by costs and battery technology that limit the vehicles' range.

Manufacturers are racing to bring the technology to market as consumers seek alternatives to traditional engines and high petrol prices.

Although most automakers are working on hybrids, Toyota has the advantage of 10 years of experience in selling the technology, and 10 years of feedback from drivers on which to base improvements, rather than relying on information from labs.

Toyota has placed a large emphasis on hybrid technology:

It offers several hybrid models besides the Prius, including the hybrid Camry and hybrid Lexus models.

It has set a target of selling a million hybrids a year sometime after 2010.

The more common hybrids such as the Prius switch between an electric motor and petrol engine to deliver better mileage.

They don't need to be plugged in to recharge because they recharge the motor as they run, converting energy from the wheels and braking.

Toyota said in June 2007 that its cumulative sales of hybrids passed 1 million vehicles since it began selling the Prius a decade ago.

Details of its plug-in hybrid tests for the U.S. and Europe are still undecided.

General Motors is developing the Chevrolet Volt plug-in hybrid, and says it hopes its plug-ins can reach showrooms

Ford has been testing plug-in hybrids based on the Escape sport-utility vehicle, for one, but has not said when it plans to start mass producing them.

(i) to check the terms of their licence agreements for use of content outside news programming and that further advice and assistance can be obtained from the AP Archive on: Tel +44 (0) 20 7482 7482 Email: info@aparchive.com