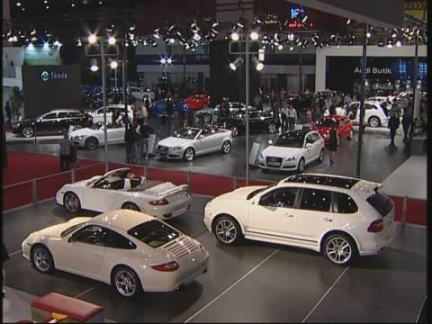 3. Tilt down to Porsche LeMans 24 vehicle of Porsche from Porsche sign

"This year we are very much satisfied with our expectations from Auto Show. There is very big interest top our stand. The information we have from the organisers that more than hundred thousand visitors visited our hall on Sunday."

"Half of the cars on our stand are sold after the first three days of the show and we are very happy about this. I can say that we as our brand haven't seen any negative affect of the global economic fluctuation."

15. Pan from computer screen showing the working principals of Lexus Hybrid to the demo vehicle

16. Visitors around the Lexus Hybrid

"It is odd that after these economic crises started in USA and Europe how people still show such big interest to these expensive vehicles and buy them. And I am quite surprised that how those people could pay that much money after all in this economic circumstances."

"There is a reality of economics in Turkey. If you take a look, you will see that the high segment vehicles which are about 150 - 200 thousand Euros (200 - 272 thousand US Dollars) are sold but the vehicles for moderate level for example 30-40 thousand Turkish Lira ( 21 - 29 thousand US Dollars) are still sitting on the bench. This is a very good indication of Turkish economy and the abyss between the reach and poor in Turkey. Rich are really reach and the poor is really poor. There is no level in between."

Despite the economic crisis across the globe, sales representatives at the motor show in Turkey are optimistic about the future.

And it's not the cheaper models that are selling well.

From eco cars to the latest high end sports models there's something to suit every budget at the 12th International Auto show Exhibition in Istanbul.

And despite fears of a slow down in the motor industry, industry insiders remained upbeat.

Cagri Oztas of Dogus Oto, a car dealer which represents Audi, Porsche, Bentley, Skoda and VW in Turkey, says more than 100 thousand visitors came to their hall on Sunday October 12, 2008.

Mert Kalyon, a representative of the Volvo Car Turkey says that they sold half of their cars on the show in the first three days.

Both salesmen say these figures show the global economic crisis has not affected Turkey yet.

However visitor Cenk Diken says he is surprised to see the amount of money some people can pay for a vehicle at a time of widespread economic crises.

Another car fan Hayrettin Ozturk says that success of luxury brands, despite the global economic crisis, shows the disparity between the super wealthy and the incomes of ordinary Turks.

Although Istanbul lacks a range of concept cars because of a conflicting timetable with the recent Paris Auto Show, Mazda were showing off their model called Kazamai.

Many of the vehicles are being promoted as fuel efficient or utilising environmentally friendly energy alternatives to carbon based fuels.

Visitors could also view a selection of environmentally friendly vehicles for every budget.

Toyota Motor Corp was showing off two hybrid cars : the luxury -class Lexus GS450h, which is powered by an electric motor and gasoline engine, or the Prius, for more modest budgets.

Gas-electric hybrids like the Prius deliver better mileage by switching between a gas engine and electric motor, and a plug-in hybrid can travel longer as an electric vehicle, using less gasoline than a regular hybrid.

In August 2008 Toyota lowered its global sales target for 2009 by 700,000 vehicles to 9.7 million, showing that even one of the world's most durable automakers is being hurt by rising material costs, a slowing U.S. market and soaring fuel prices.

The exhibition takes place in an area of 120,000 square meters, and 650 thousand visitors are expected to visit the show.