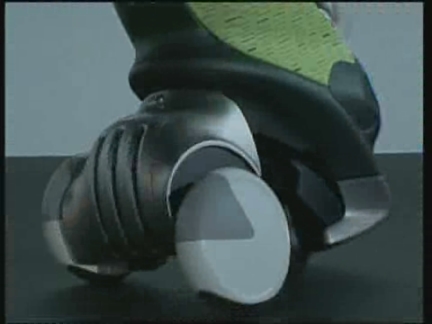 "We have made this vehicle as small as possible so that it will be able to blend in the crowds naturally when it runs and walks. So, we designed this based on the width of people's shoulders."

"We are planning to introduce hybrid technology to all Toyota cars including, of course, Lexus. We are going to use our environmentally-friendly technologies for all Toyota cars in the future. We are aiming to see one-hundred per cent of our cars like that."

8. Close-up woman in the car seat being lifted

11. Close-up of UFE-3's camera attached outside of the car

14. Wide shot of Ionis, a woman on the driver's seat adjusting the seat position.

16. Close-up speedometer, pull-out to woman in the driver's seat

18. Wide shot of Honda W.O.W rotating on a stage

19. Close-up of woman placing a dog on a special dog seat inside Honda car

The automaker, based in Toyota City, reported its best-ever fiscal year-profit of 1.17 (t) trillion yen (10.3 (b) billion US dollars) for the year ending in March 2005 as sales grew in North America, Europe, Japan and the rest of Asia.

Toyota is focusing on fuel cell hybrid technology and a new mode of personal mobility.

The "i-swing", single seat personal vehicle was unveiled on stage. It moves at walking speed on two wheels when upright. When in a hurry, the chair reclines and moves on three wheels. The unit learns the habits and preferences of the owner and then stores the relevant information.

Daihatsu unveiled its hybrid car, the UFE-III. According to the maker, this car is as fast as a conventional sports car, yet it employs the eco-friendly hybrid system.

The Suzuki Ionis concept car is fuel cell-powered and uses General Motor's drive-by-wire technology to control the steering, the brakes, and the throttles. These can go anywhere in its interior space.

Drive-by-wire technology employs no mechanical links between the steering column, the wheels and the brakes. They are connected by a sophisticated system of electronic sensors, wires and controls.

The Honda Motor Company has designed a car that's friendly for dogs - the W.O.W. Part of the company's ongoing effort is to create vehicles that are easy to use and comfortable to ride in.

A special crate for dogs in the glove compartment allows owners to interact with their pets whilst driving. A bigger crate pops up from the floor in the back seat area and can be folded back into the floor when it's not needed. Bigger dogs can be buckled up with a special seat belt attached to the floor.

A big danger for pets riding in cars is of being thrown out during a crash. About a fifth of Japanese households have a dog, and demand is growing for cars that cater to 'man's best friend', according to Honda.

The W.O.W comes with removable, washable, rollout flooring and has wide sliding doors to allow easy entry and exit for canines.

Tokyo Motor show opens to the public on Saturday October 22 and runs until November 6. Many non-Japanese automobile makers are participating in the Motor Show including the world number one, General Motors.