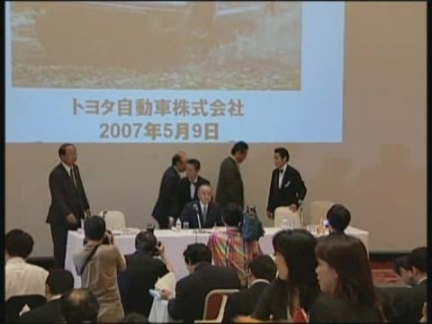 "Rather than think about other companies, I feel that we must do our utmost to satisfy customers around the world. I believe that it is an important factor to put the utmost effort in trying to sell 8.89 (m) million cars. Different divisions within the company such as the development sector to marketing sector need to improve in quality. This would be our focus and something that cannot be missed. There is plenty left for us to do."

"It concerns the internal issues of our company, but as you may see, we need to seek to resolve issues in development and marketing. We see them as opportunities even in difficult times, and we will strive to continue to achieve growth."

9. Various of General Motors cars display at the motor show

Toyota's profit in the January-March quarter climbed nine-percent as the automaker marked its seventh straight fiscal year of record sales amid robust demand for its Corolla, Camry and Lexus models.

Toyota Motor Corporation, which beat General Motors (GM) in worldwide vehicle production and sales in the first quarter for the first time ever, reported a quarterly group profit of 440.1 (b) billion yen (3.67 (b) billion US dollars) from 404 (b) billion yen the same period the previous year.

Toyota's sales are surging as soaring gas prices boost the appeal of its models, which are reputed worldwide for fuel-efficiency, including gas-and-electric hybrids like the Prius.

Analysts say Toyota is growing so quickly it's just a matter of time before it overtakes problem-laden General Motors Corp. of the US to become the world's number-one automaker, a title that technically hinges on annual worldwide vehicle production.

Detroit-based GM, the world's largest automaker the last 76 years, is seeing its US market share shrink, and has announced a restructuring plan to stem billions in losses.

Toyota President Katsuaki Watanabe was typically understated when asked about the prospects of beating GM.

"Rather than think about other companies, I feel that we must do our utmost to satisfy customers around the world," he said.

"There is plenty left for us to do," he added.

He said his company aims to boost sales in "every region" around the world, while acknowledging the auto industry remains tough, with many obstacles.

"We see them as opportunities, and we will strive to continue to achieve growth," he told reporters at a Tokyo hotel.

Earlier this month, GM reported a 62 (m) million US dollars profit in the first three months of the year for a second consecutive quarter of black ink.