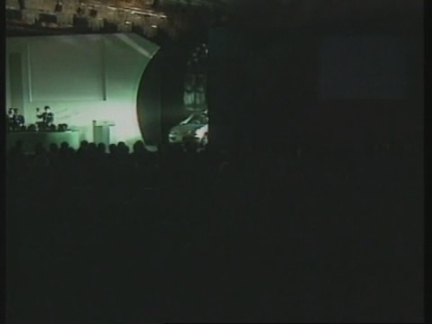 Toyota has introduced the first car that uses a hybrid of petrol and electricity for power.

The Prius (pron: PREEH-us) four-door small sedan will sell only in Japan and will cost 2.15 million Japanese yen or 17-thousand-700 U-S dollars.

Toyota claims the car emits only half the carbon dioxide of a similar gasoline-powered vehicle and cuts other tailpipe emissions by about 90 percent.

It comes less than 24 hours after the Japanese government delivered an anti-global warming plan that would require individuals to curb their use of the petrol-fuelled car.

The car of the future?

The four-door sedan, is cheap by Japanese standards, at 17-thousand-700 U-S dollars; efficient, doing 28 kilometres to a litre -- or 66 miles per gallon -- and easy on pollution, with a 90 percent reduction in tailpipe emissions.

"We need to aggressively challenge over- technological innovation. Furthermore, we will open the new era by repeatedly conversing with society."

Toyota is the first on to the market.

All the major car manufacturers, including America's Big Three, General Motors, Ford and Chrysler, and the Europeans are also working on hybrid technology.

But Toyota is the only one so far to actually bring a hybrid to the showrooms.

Toyota says it plans to sell about 1-thousand hybrids a year.

How the car will be received by consumers is unclear.

But it is sure to excite engineers across the world, who will be taking a good look at the first Prius they can get their hands on.

The hybrid is clever and expensive technology.

It runs on electricity at lower speeds when the petrol engine is less efficient and switches to petrol only after it picks up speed.

But unlike the even cleaner electric car that has to be recharged after 200 kilometres (120 miles), the driver only needs to take it to a regular gas station because its engine and brakes keep the hybrid recharged.

Although its fuel economy is an attraction in Japan, given its high petrol prices -- 90 yen per litre or 2.80 dollars U-S per gallon), how much consumers are willing to pay for a hybrid remains a question.

Both Nissan and Honda Motor Co. have recently disclosed their own hybrid technology and say they plan to put a hybrid car on the market in the next year or so.

"This is just, you know, the headstart on various hybrid systems being developed by Japanese, American and European automakers. So we'll see how it evolves but I think this is a very good headstart."

But for Toyota there is a certain cache to being first.

It's also good marketing. Toyota will be in a good position to monitor customer feedback and adjust later models accordingly.

Meanwhile, a Japanese engineering firm has unveiled the world's first magnetic powered vehicle -- albeit a small one.

With this truck, seen here in a model version, the Nihon Riken company claims petrol would be redundant for transporting goods by road and could be used only for cars and heavy industry.

The company has developed a system which is says will replace petrol with magnets as an energy source.

Teruo Kawai, the head of the project team discovered how to convert the electromagnetic energy of the permanent magnet into output energy by introducing a special switching function.

In a series of applications, iron is combined with a permanent magnet to be used as one magnetic substance.

"My final goal is, at the time when people's biggest concern is pollution, to produce a car that would not cause any pollution at all. I want to make a motor which needs less battery and is effective. That's is to say, a motor with a new concept."

The development of new environmentally-friendly power sources is timely.

The Japanese government has just set out a plan to reduce greenhouse emissions by 5 percent, including deadly carbon dioxide, methane and nitrous oxide.

The plan calls for people to substantially reduce their use of the conventional petrol-powered car.

2. Close up pan across car

3. Wide shot of car show being addressed by Hiroshi Okuda

7. Pan from prospective buyer in car to engine

9. Interior of the car

14. Wide shot of vehicle being photographed 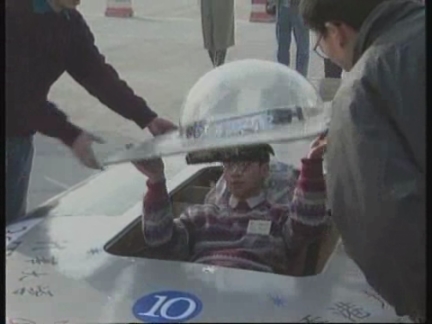 Although China is a country with one of Asia's lowest per-capita percentages of car ownership, an exhibit in Beijing last week was designed to catapult it onto the cutting edge of automobile technology.

A variety of non-petrol cars were put through their paces to see if they were up to the test.

Chinese, well-known for their love for the bicycle, were treated to an unusual spectacle last week as a non-petrol vehicle exhibition in Beijing drew to a close.

Cars using alternative energies such as natural gas, electricity and solar power hit the road Friday in a test to determine which future role they might play in China's expanding market.

This Chinese solar-powered entry was certainly the most eye-catching, but with only one seat and a sticker price of roughly 84-thousand U-S dollars, it may not be the ideal family vehicle.

Major international car makers such as Citroen, Toyota, Ford and others were represented at the Beijing car show, trying to drum up interest in alternative kinds of fuel.

Many of China's private cars today are owned by taxi drivers who drive some 300 to 400 kilometres (200 to 300 miles) a day, a distance no electric car could currently manage.

In a rapidly developing country like China, however, one of the biggest concerns over the expansion of the car industry is the pollution that goes with it.

And that's one of the key selling points of these vehicles.

"Of course there's no exhaust fumes, and the noise is very low as you have just heard, so of course it's beneficial to the environment."

Most car makers estimate that electric vehicles might well be used as busses and other public transport to reduce noise and pollution in China's booming cities.

Demand for motor vehicles in China will increase by some 8 percent next year, reaching one point 66 (m) million vehicles, according to Chinese officials.

And without an anti-pollution strategy, that demand spells danger for China's environment.

But industry executives say it's not just China that needs progress in this area.

"It's really a matter of establishing a national fuel policy - not only in China, but in any region."

This year, China is expected to build one point 55 (m) million motor vehicles and import 80-thousand.

Business and government departments buy most of China's cars.

But while the market demand for private cars is still in its early stages, it is growing rapidly.

And manufacturers hope that the success of electric vehicles in countries such as Japan will repeat itself in China.

12. Solar powered car and electric car pass each other in opposite directions on track 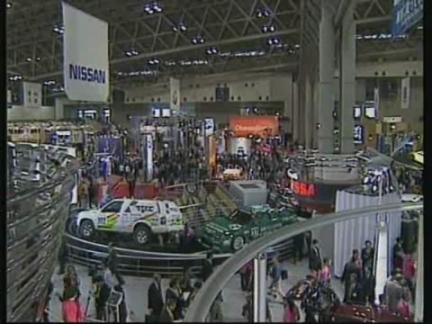 Japanese and European car makers had their latest designs on display at this year's Tokyo motor show with innovations being found in the growth area of environmentally-friendly cars.

But the spotlight was stolen by Mercedes Benz which unveiled a new concept limousine - the "Maybach" which mixed classical with the modern.

All the major Japanese and European car makers are attending the Tokyo car show.

Nissan may not have had many new millennium designs, but they were certainly not short of practical designs.

This new model is perfectly suited for racing across the Sahara desert.

Mazda was a solid family car with more wedge in the front.

They hope these new weekend wagons will go down well with drivers who have young families to transport.

With carbon monoxide emissions into the atmosphere reaching record levels and the hole in the ozone layer above the Antarctic growing every year, pressure is mounting on car makers to produce vehicles that do less damage to the environment.

"Some people seem to have jumped to the conclusion that electric cars will solve the problem of C-O-2. We have to be reminded that what ever car we make, we will use some sort of energy and we cannot avoid the environmental problem. What we should have to do now it to try and make a smaller car and a car which needs less fuel."

Honda has unveiled a Zero-Level Emission Vehicle, although that is a something of a misnomer as emissions are still not as low as those form electrical cars.

During tests, the engine was able to cut emissions of carbon monoxide, non-methane organic gases and nitrogen oxide to ten percent of the world's most stringent standards.

However Honda's chief executive wasn't sure when its new engine would be available in all its models.

"We think we have to wait, we have to compete and.... finally the result will be decided by the environment itself."

Meanwhile Mercedes Benz, which has merged with Daimler, stole the spotlight on the first day, unveiling to the world for the first time its new classic limousine for the future.

Company executives have not decided whether to put the design into production .

But new designs are not the only topic under discussion.

Trade issues are, as always, on the agenda.

The U-S continues to be unhappy with Japanese trade barriers against it cars despite a bilateral agreement two years ago.

The Europeans, however, are saying the Japanese market is very open, sales are at record levels in the world second biggest auto market.

"I think there are two things. One we have to have a strong organisation and the other one is you have to have the right product which differentiates yourself from the local manufacturers. If you don't have that you won't be successful."

And the Japanese motor giant, Mitsubishi continues to prove itself at the cutting edge of motoring.

This concept car of the future does not need to be driven, it drives itself while you sit back an enjoy the ride.