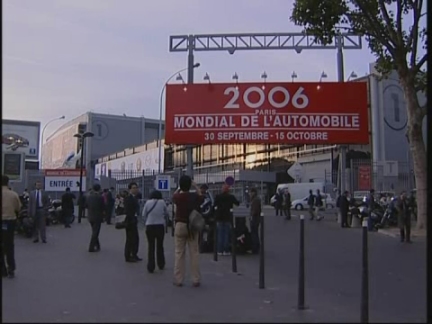 3. Pan down from Dodge stand sign to Dodge car with hostess standing next to it

4. Close up of Dodge hostess

"We are the first in the world to present Astrolab, an electro-solar vehicle. It uses the sunlight to recharge its batteries. It is an inter-urban vehicle with a maximum speed of 120 kilometres (119 miles) and a 110 kilometre (68 mile) autonomy. Right now, it is only a concept car but it will soon be commercialised."

9. Pan down from Landwind stand sign to Landwind X-pedition vehicle

"The French and German markets being important ones, we would like to start with them before expanding to other world markets."

15. Tilt up to Toyota Prius Hybrid cut in half

16. Close up of Prius Hybrid engine

"In a normal start up situation, you are going to start up in electric mode just with the electric motor driving you, so you pull away silently. When you need some more power as you start to accelerate, gasoline engine would start up as well seamlessly and continuously, you can accelerate on. As you accelerate hard, you then get a combination of power from the gasoline engine, power from the battery driving the electric motor to give you the acceleration and torque that you want."

"When you use petroleum which is a fossil energy stuck in the ground, there is carbon in it, you take this carbon out and transform it and put it in a car and reject it outside. During photosynthesis, plants will absorb a part of it put not everything so you keep on adding CO2 to the atmosphere. When you use ethanol, ethanol is an alcohol made out of beet, sugar cane or wheat fermentation, you take this CO2 out of plants, you transform it and then consume it. And that CO2 taken out of the atmosphere is rejected in the same quantity. So it is a closed circle that does not add CO2 to the atmosphere. That is why we say that in the long run we could reject 75 percent less CO2 than what is used with a fossil energy."

Pushing hybrid technology ever further, a number of environmentally friendly vehicles are on display at this year's Paris Auto Show.

Motor companies from around the world displayed their 2008 models at the Paris Motor Show.

The Mondial de L'Automobile is expected to showcase more than 60 new designs and concept cars from manufacturers from Detroit to China, and is expected to draw more than a (m) million visitors.

While some vehicle manufacturers stick to tried and tested vehicles and displays, others push the boundaries of technology.

With a greater demand for cleaner cars many manufacturers displayed the latest environmentally friendly designs, including the latest in hybrid technology.

Many hybrid cars incorporate a mixture of technologies such as internal combustion engines, electric motors, battery (electricity) hydrogen and fuel.

And car maker Venturi were in a league of their own with their electro-solar car the Astrolab.

According to Venturi the vehicle can reach a top speed of 120 kilometre per hour (119 miles per hour).

Marianne Hollande from Venturi Automobiles says they are the first company in the world to produce such a car.

As well as carmakers from the US and Europe, this years car show also welcomed a number of car manufacturers from China.

On show was the Landwind X-pedition made by JiangLing, the first Chinese car to be sold in Europe.

But along with the less familiar names were household vehicle manufacturers.

The Toyota Prius Hybrid runs on both petrol and an emissions-free electric motor.

While the SAAB Aero X, a fossil free hybrid concept car, has been seen at a number of car shows this year.

Stephane Huguet, SAAB spokesman explains the how the biofuel engine is better for the environment.

(i) to check the terms of their licence agreements for use of content outside news programming and that further advice and assistance can be obtained from the AP Television News Library on: Tel +44 (0) 20 7482 7482 Email: info@aptnlibrary.com.