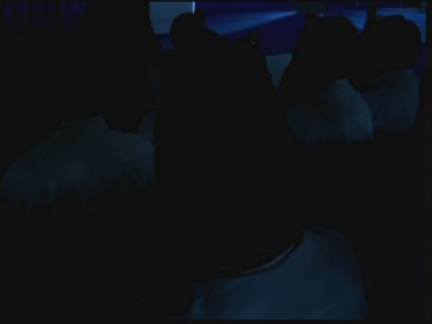 1. Tilt up, FCX Clarity entering the stage for line-off ceremony

3. Mid of driver closing the door, bowing to the audience

5. Wide of President Takeo Fukui walking to centre stage to address the audience

"Today is an historic day celebrating the new step towards a more widespread use of our fuel cell vehicle."

9. Mid of keys presented to the customers

10. Tilt up of Jon Spallino holding the car key

11. Wide of other two receiving the key from the president

13. Zoom out of President Fukui leaving the ceremony on FCX Clarity with the customers seated in the back

19. Mid of engineers lifting the body

21. Wide of engineers picking up too to adjust the hydrogen tank

23. Close of hydrogen tank from below

"I am just really looking forward to a completely new alternative of transportation. So, I just want to be a part of the offerings that are available. This is an extraordinary one for sure, and it is an exquisite vehicle, and it is so fun to drive."

26. Mid to pan of the Spallino family getting in the car

28. Close of meter on the driver panel

30. Wide to pan of FCX Clarity approaching and passing by

"The drive is fantastic. It's a great acceleration, great handling, and great comfort."

32. Pan of vehicle slowing down to a halt

33. Tilt up of vehicle interior mechanics

"We have been working hard on the environment friendly technology, but the global climate is facing a serious situation, and it is important for us as a company to take a lead in addressing the problem. I think there is no future for the automotive industry unless we work on it as a whole, and we want to be at the forefront."

36. Zoom out of the car from the front

"Right now, the engine takes up a lot of space in gas-fuelled cars, but I want to create something different and more attractive with the fuel cell car. The styling, the driving feel, and the spacious interior of FCX Clarity are all new values and qualities created by the new fuel cell system."

The new vehicle is headed to southern California, where Hollywood is already abuzz over the latest splash in green motoring.

The FCX Clarity runs on hydrogen and electricity, emitting only water and none of the gases believed to induce global warming.

Honda's latest creation is, according to the manufacturers, two times more energy efficient than a gas-electric hybrid and three times that of a standard gasoline-powered car.

Designed for practical every day use, the car speeds up to 100 mph maximum and travels as far as 270 miles.

Honda expects to lease out a "few dozen" units this year and about 200 units within a year. In California, a

three-year lease will run $600 a month, which includes maintenance and collision coverage.

Senior Chief Engineer, Sachito Fujimoto, says the car excites him not just because it satisfies the company's environmental responsibility. The architecture of the car, which uses a fuel cell stack, creates avenues for exploring new designs, performance, and sensations behind the wheel.

"I am just really looking forward to a completely new alternative of transportation," said Laura Harris whilst adding that the car was both extraordinary and exquisite.

Harris, Spallino and Yerxa were flown to the ceremony,courtesy of Honda.

through its Web site but considered only buyers living near hydrogen fuel stations in Torrance, Santa Monica and

Initially, however, the Clarity will go only to a chosen few starting July and then launch in Japan in the autumn.

Although Honda Motor Co. was the first Japanese automaker to launch a gas-electric hybrid vehicle in the U.S. in

1999, it has been outpaced by the dominance of Toyota's popular Prius.

Toyota announced in May that it has sold more than 1million Prius hybrids, while both the Honda Insight and the

hybrid Accord have been discontinued due to poor sales.

Honda plans to deliver at least 200 FCX Clarity over the next three years in Japan and the US combined as initiatives for achieving more widespread use of fuel cell vehicles in the future.

The FCX Clarity is part of Honda's plan to keep pace with rivals in green technology. It also plans to launch a

gas-electric hybrid-only model, as well as hybrid versions of the Civic, the sporty CR-Z and Fit subcompact.