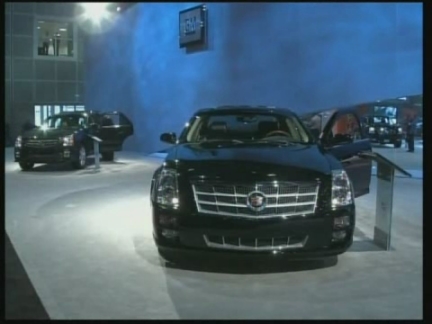 3. Side-on view of a Chevrolet car

6. Close-up of radiator grill on car

"But what will power us through this is very simply great product. Fuel efficient cars, trucks and crossovers."

"It means they're serious. It means that right now they are really fighting for their lives. They are spending all their time basically in Washington and at home, trying to make sure they are going to have a future, right now it's more important for them to be in Detroit and to be in Washington, trying to get some cash out of the government, than it is to be here."

"We found out and we're absolutely convinced about it, there is this greener trend as we described before. Not only here in California - it's in other places in the United States as well, but it is also the case in Europe and Asia."

17. Tilt up of Honda Civic Hybrid

"We are in the midst of a very challenging period in the history of our industry and the events of recent months have proven that none of us is immune to the impacts from a contracting economy, stalled credit market and collapsing consumer confidence."

20. Various of vehicles on the Hummer stand

Chrysler and General Motors continued to show off their latest model vehicles at the Los Angeles Auto Show on Wednesday but their displays were noticeably quieter than usual as Asian and European companies unveiled their own new models that will likely chip away at the US market share.

Casting a shadow on the annual event's glitz was the absence of press conferences or new vehicle debuts from GM or Chrysler, whose top executives were in Washington DC pleading for 25 (b) billion dollar government bailout package they say they need simply to stay in business.

Chrysler's display included its three electric prototypes, a Dodge, Jeep and Town & Country EV, one of which it plans to put in showrooms around the same time.

Normally, however, they would have a stronger presence, unveiling important new models and concept cars and sending top executives to meet the press.

In 2006, GM's Chairman and Chief Executive Officer, Rick Wagoner, was the keynote speaker and the company unveiled a hydrogen-powered concept vehicle.

Wagoner however was in Washington this week, appearing before a House Financial Services Committee.

Ford Motor Company maintained a larger presence at the show, although its CEO, Alan Mulally, also appeared before the House Financial Services Committee in Washington on Wednesday.

His company unveiled the 2010 Ford Fusion, Mercury Milan sedans and new hybrid gas-electric versions that the Dearborn, Michigan, company hopes will take sales away from the Toyota Camry and Honda Accord.

Chrysler brushed aside criticism for not revealing a new model after announcing its electric models at its Auburn Hills, Michigan, headquarters in September.

The auto industry's health is worst in the US, where high gas prices sparked a sales decline leading to last month's worst sales rate in 25 years.

Nissan and its Japanese rivals, including Toyota and Honda, have cut their production plans and have slashed their profit estimates for the year.

But that didn't stop them from introducing new innovation on Wednesday.

Honda showed off a version of its new Insight gas-electric hybrid, which it plans to put on sale early next year.

Volkswagen AG unveiled a Touareg V-6 TDI sport utility vehicle as part of a showcase of diesel-powered technology it hopes will overcome tough emission requirements and Americans' memories of the smelly, noisy diesel vehicles of decades past.

BMW's Mini brand started things a day early by showing off an all-electric version of its eye-catching compact cars.

GM had planned to unveil its new Buick LaCrosse sedan at this week's show and Lutz was supposed to be back but the Detroit automaker scaled back its presence to focus on the company's financial problems.

The Detroit Three are seeking a federal rescue after GM and Ford reported burning through a combined 14.6 (b) billion dollars in the third quarter.

GM has said that it may not have enough cash to survive into next year and the situation for Chrysler appears similarly dire.