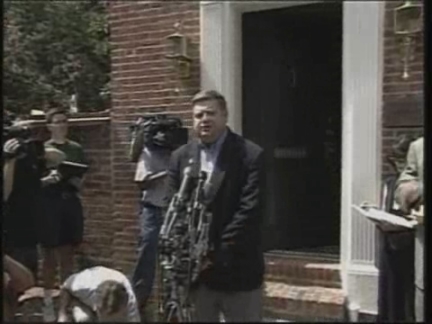 Dr. Stephen J. Hatfill, the biowarfare expert under scrutiny in the United States anthrax attacks, on Sunday declared his innocence and lashed out against Attorney General John Ashcroft for calling him a "person of interest" in the investigation.

For the second time in two weeks, the scientist went before a throng of reporters outside his lawyer's office to profess his innocence and complain about the attention from law enforcers that he says has destroyed his life.

Ashcroft last week would not say if authorities have identified a suspect in last fall's anthrax mailings but said Hatfill remained "a person of interest to the Department of Justice."

Although authorities say Hatfill is one of 30 such people, only his photo was shown to residents of the Princeton, New Jersey, neighborhood where a mailbox tested positive for anthrax this month.

A law enforcement official said at the time that F-B-I agents were trying to determine whether anyone saw Hatfill last September or October near a mailbox where authorities believe the anthrax letters were mailed.

One day after Hatfill's August 11 news conference, a federal law enforcement official said the F-B-I was not ready to clear Hatfill in the attacks that killed five people and sickened 13 others even though investigators have no physical evidence linking him to a crime.

Hatfill, 48, previously worked at the Army Medical Research Institute at Fort Detrick, Maryland, once home to the U-S biological warfare programme and a repository for the Ames strain of anthrax used in the attacks.

Investigators have searched his apartment in Frederick, Maryland, twice, including testing for anthrax residue, as well as his car, a storage unit in Florida and his girlfriend's home. They have seized his computer and bags of personal items he had thrown away in preparation for moving.

"I want to look my fellow Americans directly in the eye and declare to them 'I am not the Anthrax killer'. I know nothing about the Anthrax attack I had absolutely nothing to do with this terrible crime. "

"It is definitely not good to be the girlfriend of a person of interest, (pauses to wipe away tear) my girlfriend was locked inside an FBI car and hauled off to FBI headquarters and interrogated for hours, without once being told she has the right to leave any time she chooses. Her requests for a lawyer were delayed and made difficult."

"And as an investigation that is characterised by the apparent avoidance of any avenue of inquiry except the once decided upon the Attorney General. Most importantly it was driven by a compelling and overwhelming desire that the FBI look good at any cost, regardless of the cost to individual freedom, due process, common decency and civil liberties."

10. Hatfill walks across street back to attorney's office 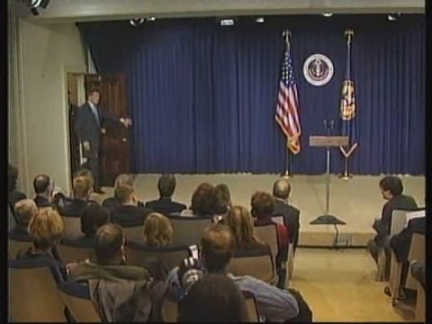 2. Wide view of Government Officials in front of reporters

"This briefing will be the first of many opportunities that we will have to discuss homeland security and our government's response efforts."

"We in the F-B-I are pleased this morning to join with Post Master General Jack Potter to announce a reward of up to 1 million dollars for information leading to the arrest and conviction of those responsible of terrorist acts of mailing anthrax."

"The best defence that we have right now is an educated American public, an educated work force, both the employees in the postal service and those who work in mail rooms and our message has been consistent. It's very clear, if you receive something that is suspicious, we want you to isolate it, put it in a plastic bag. Don't let other people touch it, don't taste it, don't shake it, don't sniff it ... these are very common sense things that we are asking the American public to do and then we are asking them to call law enforcement."

"The administration took steps this week to expand antibiotic stockpile, even further. We now have enough to serve 2 million people for 60 days which is what is recommended when one has been exposed to anthrax. We have now taken steps to expand that so that we can in fact serve up to 12 (m) million people with ciprofloxicin for up to 60 days."

"I would say that even though this press conference suggests it's really about anthrax. Generally we are more vigilant today, and continue to get more vigilant every day as we assess every risk that might present themselves in this country. If you take a look at everybody, the F-B-I, the Border Patrol, the Coast Guard, the C-D-C - everybody is working 24-7. We have engaged the State and Federal communities. I think our antennae are up for all conceivable risks and you ought to be reassured of that."

11. Pan view of Ridge walking out of briefing room.

Ridge told reporters that a total of five people have been infected with anthrax in the US, out of thousands and thousands that have been tested so far in the scares that have swept the country.

He says a sixth possible infection is being evaluated.

Ridge and other top Bush administration officials sought to calm public fears over the anthrax attacks.

F-B-I Director Robert Mueller said that the government was offering a one million dollar reward for information leading to the conviction of anyone responsible for the anthrax attacks.

And Postmaster General John Potter announced that the postal service would mail within the next week a postcard to everyone in America outlining what they should be suspicious of in mail they receive.

U-S Surgeon General sought to allay fears that there were not enough antibiotics to treat those who may have come in contact with anthrax.

Dr David Satcher said that in addition to increasing the available antibiotic Cipro other types of antibiotics were know to treat anthrax.

When asked by reporters, Ridge denied the Bush administration was focussing on anthrax to the detriment of dealing with other terrorist threats. 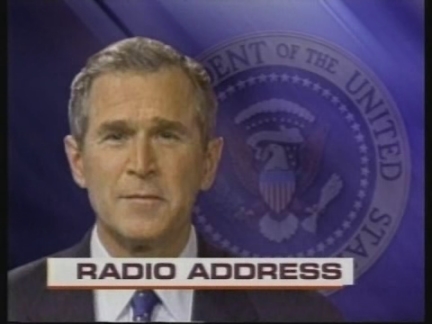 Florida, New York, New Jersey, and Washington, D.C. I commend the many health

have been exposed, and provide preventative antibiotic treatment. Their quick

work has no doubt saved lives. We do not yet know who sent anthrax to the United States Capitol, or several different media organisations. We do not, at this point, have any

of September 11. We do know that anyone who deliberately delivers anthrax is

engaged in a crime and an act of terror, a hateful attempt to harm innocent

people and frighten our citizens. Our health care laboratories and law enforcement officials continue to work overtime to test samples, to track leads, to prosecute hoaxes that have now been reported not only across America, but across the world. These attacks once again reveal the evil at the heart of terrorism, the evil we must fight. The nations meeting here in Shanghai understand what is at stake. If we do not stand against terrorism now, every civilized nation will at some point be its target. We will defeat the terrorists by destroying their network, wherever it is found. We will also defeat the terrorists by building an enduring prosperity that promises more opportunity and better lives for all the world's people. We will oppose envy, resentment and anger with growth, trade and

He condemned the use of Anthrax against innocent civilians and warned that those responsible will be brought to justice for the criminal acts of terrorism.

He also added that the United States laboratories and law enforcement are working overtime to ensure the safety of US citizens and to track down the malicious individuals or organisations who are spreading panic and terror throughout the country.

President Bush is currently visiting APEC summit in Shanghai, which is his first overseas trip since attacks on Sept.11.