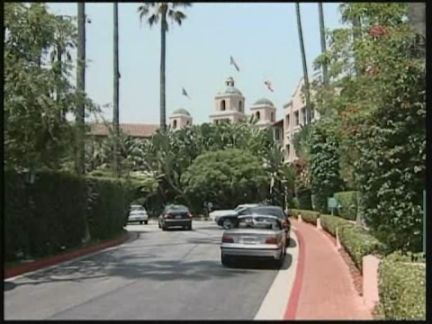 "We are here to support the Hollywood Foreign Press because they are giving to many non profit organisation that are going to be helping the next batch of aspiring filmmakers. And I am here because I want to support them because they honoured me so much earlier in the year by nominating me for best actress."

8. SOUNDBITE (English)Zhang Ziyi, on FilmAid International, the charity for which she is accepting:

"I am here on behalf of FilmAid International. As an actress, I believe in the power of film. They bring film to the refugee camps and they use film top promote health, conflict resolution and human rights amongst other things."

10. SOUNDBITE (Mandarin) Zhang Ziyi, on what Asian audiences can expect from her new film, "Memoirs of a Geisha":

Q: Tell us why are you here today?

"Well, I don't know how the folks realise this but every year, the Hollywood Foreign Press, they raise a lot of gold and they have grants that they give away. And this year a lot of it is going to higher education: this is all good stuff! that's one of the reasons I am here."

"Thanks, it is my great pleasure to be here today on behalf of Martin Scorsese and the Film Foundation. I am here to say thank you to the Hollywood Foreign Press Association for their generosity and their leadership and their unwavering commitment to film preservation. I think you just have said it, in the last nine years, the HFPA has contributed over 1.6 million dollars, to save over sixty feature films that would be lost forever. It is my great honour to accept this contribution here, today and on behalf of the film foundation, I offer my deepest gratitude to the Hollywood Foreign Press Association and to thank you for your ongoing support and personally say, thanks for the monies! "

SOUNDBITE (English) Zhang Ziyi, on FilmAid International, the charity for which she is accepting:

"On behalf of Film Aid International, I want to express our enormous gratitude to the Hollywood Foreign Press Association for their continuous, generous support. There is about 33 million refugees and displaced people all over the world. that means, 33 millions survivors who are full of potential, yet starved of hope. Film Aid gives them hope. Film Aid converts a seven tonne truck into a mobile cinema unit, which travels throughout the refugee camp to screen movies for free under the stars. Film Aid uses film to promote health, conflict resolution and human rights, amongst other things. I don't want anyone to walk away today felling depressed or overwhelmed by the size of the problem, we have a phenomenal solution, all it needs is help from friends, like you. So on behalf of Film Aid and the thousands of refugees who benefit from these screenings, I want to thank the Hollywood Foreign Press Association for their wonderful gift. Thank you!"

Actor Brad Pitt marked his first public appearance Wednesday (20 July 2005), following his 13 July release from a Los Angeles hospital after being diagnosed with a mild case of viral meningitis.

Looking happy and healthy, Pitt reportedly arrived at the Beverly Hills Hotel on a motorcycle. The actor was there to accept a charitable donation from the Hollywood Foreign Press Association (HFPA), the group that produces the annual Golden Globe Awards.

The HFPA presented Pitt with a $250,000US cheque, who accepted on behalf of director Martin Scorsese's The Film Foundation, which focuses on film restoration.

Pitt, in jeans and a white jacket, and whose hair is still dyed blond, skipped the arrivals line and did not speak with media, though he did make a brief speech upon accepting the cheque.

Zhang accepted money on behalf of FilmAid International, which brings filmed entertainment and education to Sudanese and other refugees in the Kakuma Refugee Camp in northwestern Kenya.

Zhang also spoke with AP Television News about her new film, the long-awaited "Memoirs of a Geisha," (from director Rob Marshall) in theatres at year's end.