Ellen Strauss, a friend of millionaire Robert Durst's first wife Kathleen Durst, said she is "over the moon" about his arrest.

Strauss has been investigating the death of her friend for over 30 years and feels vindicated by Durst's arrest.

"I will take his going to jail anyway I can, I'm not fussy, he can only go to jail once. What I would like is for him to tell us, on his death bed if he has to, where he put Kathy's body or pieces of it," said Strauss.

Strauss said she has spoken to Kathleen Durst's family and said they are "very happy" with the arrest.

"They've finally seen an end to it. You know she has a mother that's 101-years old living at home, 101 and not knowing for the last 33 years where her daughter is," said Strauss.

Durst was charged Monday in Los Angeles with first-degree murder in the shooting of Susan Berman, the daughter of a prominent Las Vegas mobster. Durst has also been suspected _ but never charged _ in the disappearance of his first wife in New York.

He could face the death penalty under special circumstances that allege he ambushed Berman and murdered a witness to a crime.

Authorities found more than a quarter-pound of marijuana and a revolver in Durst's hotel room when he was arrested over the weekend, a prosecutor said Tuesday.

Durst appeared before a judge for a second straight day on Tuesday to face the drug and weapons charges.

In 2003, he was acquitted of murder in a dismemberment death in Texas.

In a documentary that just wrapped up about Durst's troubled life, he mumbled about how he "killed them all," providing a dramatic kick to the end of the series. But a law enforcement official said his arrest on the murder charge was based on words he wrote.

Analysis linked a letter Durst wrote to his friend Susan Berman a year before her killing with one that pointed police to her body, and that was the key new evidence in the long-dormant investigation into the 2000 killing, the official not authorized to speak publicly told The Associated Press on the condition of anonymity because the investigation was ongoing.

"I'm over the moon, absolutely over the moon. That's why I agree to do all these interviews, I'm exhausted. I wish my friend Eleanor Schwank, who worked with me on this, who just passed away could see it."

"I will take his going to jail anyway I can, I'm not fussy, he can only go to jail once. What I would like is for him to tell us, on his death bed if he has to, where he put Kathy's body or pieces of it."

"They're very happy. They've finally seen an end to it. You know she has a mother that's 101 years old living at home, 101 and not knowing for the last 33 years where her daughter is."

"I think the trial is another chapter. I mean I'm waiting for that to be the nail in his coffin. He's got to squeak out of this one, that would be really amazing."

"How hard everybody worked, how hard all of us worked and it now seems that maybe it paid off, that it did pay off. I know that that the last chapter isn't written yet, but that is what life is all about surprises."

2. SOT Dr. Ruth Westheimer. Including soundbite: "I am very happy that he is doing work for AIDS research and if he gets the Nobel Prize, if he wants me to I will go with him to Stockholm. I will pay my own trip."

4. VS Children of Uganda singing with CA press

7. VS Children of Uganda singing with CA press

13. SOT Jay Z. Including soundbite: "I think it's a beautiful thing - I think he should win a Nobel Peace Prize. He is a beautiful person."

21. Pan across red carpet to Sheryl Crow being interviewed

22. VS Sheryl Crow being interviewed with Tony Bennett in background

23. SOT Isaac Hayes. Including soundbite: "Cheers for Bono. He is doing the right thing - he knows that. He's just confronted the issues and confronted the people who have the power to do something about it."

27. MS Mayor of New York Michael Bloomberg, Tony Bennett and Recording Academy Chairman of the Board of Trustees Garth Fundis

34. SOT Tony Bennett. Including soundbite: "I have received 11 of them and I am nominated this year for two of them. So I am keeping my fingers crossed."

"Yeah, yeah I think Bruce wrote an extraordinary record and he deserves any recognition that he gets."

"I think he's a great example for everybody. There's a new generation coming up who maybe aren't used to seeing a lot of beneficial things being done by anybody so it's nice to see Bono representing those of us in music the way that he does."

37. VS red carpet and press

44. SOT Garbage. Including soundbite: "I mean we have all in the band lost friends through AIDS and currently have friends living with HIV, so this is something that is close to our heart and we feel compassion for people who are less fortunate than ourselves - we've had incredible lives and we are just aware that we are just aware of people out there that are not so lucky."

45. Zoom in BB King being interviewed

Tape Two (Not on shelf)

8. SOT Marnie from the Dixie Chicks

10. Pan up Dixie Chicks being interviewed

14. Pan from John Mayer to Michael Stipe being interviewed

16. SOT Michael Stipe. Including soundbite: "I have been to so many dinners for Bono this year. If he calls me again I'm going to say 'if there's four people or less I'll be there' but this is the last one Bono, I'm telling you - it's over!"

19. SOT Ashley Judd and husband Dario. Including soundbite: "I mean we've all been U2 minions for 20 years now and the music means a lot to us, but this is a chance to honour Bono not just for his music but for the way in which he lives his life."

26. SOT Bono. Including soundbite: "It's great. I am having the time of me life actually and it is much better to be having a good time while you are alive than when you're dead because usually when you're dead you get a party like this thrown for you."

31. SOT Naomi Campbell. Including soundbite: "I think he is amazing, I think he's amazing!"

33. VS Bonnie Raitt being interviewed

41. VS Carly Simon being interviewed

42. SOT Carly Simon. Including soundbite: "It's that he has not stopped we're aware of his presence in being really caring about the music community and so much more for such a long time."

5. SOT Dixie Chicks. Including soundbite: "This is thrilling and it reminds you that you are still in the game. Every year that goes by you wonder if people are going to forget about you. We take a lot of time off to have babies and stuff like that. We are most proud of this album so we are most proud of these Grammy's."

20. SOT Norah Jones. Including soundbite: "I don't know, I'm going to have to move first, get another apartment. It's amazing, career wise this is probably the biggest ever thing that I will ever do. I don't expect another record like this. It kind of happened, it's exciting that it happened but it doesn't happen every day."

21. SOT head of the Grammys 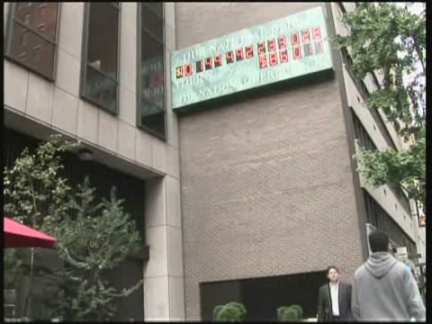 "If you notice the dollar sign, we actually had to add a dollar sign and a one. It looks a little bit squished together. We had to squeeze everything together."

"It's pretty scary, it's a pretty big number."

"I think we'll be able to handle it, we've got a strong economy, we'll walk through it, just got to have a strong stomach, steel up."

"I'm starting to wonder when we're going to start questioning the US government's credit rating. And you know the Federal Reserve's balance sheet is going to be just as risky as all the banks they're saving because they're taking on all this stuff."

In a sign of the times, the National Debt Clock in New York City has run out of digits to record the growing figure.

As a short-term fix, the digital dollar sign on the billboard-style clock near Times Square has been switched to a figure - the "1" in 10 (tr) trillion US dollars.

It's marking the federal government's current debt at about 10.2 (tr) trillion US dollars.

The Durst Organisation says it plans to update the sign next year by adding two digits.

That will make it capable of tracking debt up to a quadrillion dollars.

The late Manhattan real estate developer Seymour Durst put the sign up in 1989 to call attention to what was then a 2.7 (tr) trillion US dollars debt.

Helena Durst, the inventor's granddaughter, explains the recent modifications: "if you notice the dollar sign. We actually had to add a dollar sign and a one. It looks a little bit squished together. We had to squeeze everything together."

The clock was briefly retired, for two years, from 2000 to 2002, because the clock couldn't display a declining number.