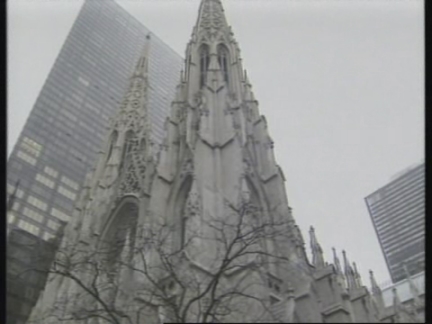 Americans celebrated Easter Sunday with a combination of popular and religious events.

In New York, bad weather didn't deter some from turning out to show off handmade Easter bonnets.

Under gloomy skies and in the shadow of Saint Patrick's cathedral, New Yorkers came out to celebrate Easter with their traditional parade down Fifth Avenue.

From the very old to the very young, participants in the procession sported elaborate Easter bonnets that ranged from the elegant to the outlandish.

Plastic Easter eggs and Easter decorations dangled from some hats, while others made a more obscure statement.

Celebrants say that in addition to being a lot of fun, the New York tradition brings people closer together.

From all over the world, people come, that's what I love, is the spirit you feel only once a year, only on Easter, no other day of the year.

There's no other place I'd rather be on Easter than on Fifth Avenue. It's the only place to be.

Along with the children and the bonnets came Easter bunnies some fake, some imaginary, and some real.

His name is Schizo. Only because I'm always on my hands and knees trying to catch him.

At the non-denominational National Cathedral, parishioners celebrated the resurrection of Christ through the Festival Holy Eucharist.

Jesus Christ overcame death and opened to us the gate of everlasting life. Granted we who celebrate the day of the lord's resurrection. CUTAWAY For our sake he was crucified under Pontius Pilate. He suffered death and was buried. On the third day he rose again in accordance with the scriptures. He acceded into heaven and is seated at the right hand of the father.

An estimated four thousand people crowded into the cathedral for the service.

Other Washington services included a sunrise sermon at Arlington Cemetery and a service at the national shrine.

5. Various of people in parade

7. CU stuffed animals on hat, zoom out to parade

19. People walking out of cathedral tilt up to cathedral 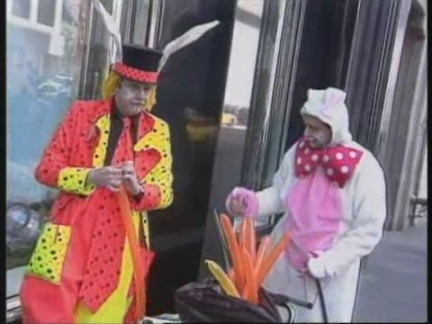 Thousands of New Yorkers turned out for the annual Easter Parade down Fifth Avenue.

Some wore elaborate bonnets and others just turned out to watch the fun.

Fifth Avenue was blocked off to traffic for the annual spring promenade.

When the church services in Manhattan ended, the parade began.

There was a carnival-like atmosphere in the air with balloons and baskets and flowers on almost every head.

One woman seemed a bit confused about the season. Instead of the ever-ready bunny, she sported an animated Santa on her bonnet.

There were hats of every description and people of all ages showing off their Easter finery.

A few animals got into the act: the obligatory Easter bunny and other family pets decked out for the occasion.

There were ethnic hats, buggy hats and hats that were good enough to eat.

Some even coordinated their millinery creations with their friends: witness the four seasons on parade.

For some with short legs and a big bonnet, it was all too much.

1. Easter bunny and friend with balloons.

3. Close up of hat, woman with huge floral arrangement hat.

16. Woman with daffodils and chicks.

17. Girl with bonnet on dad's shoulders. 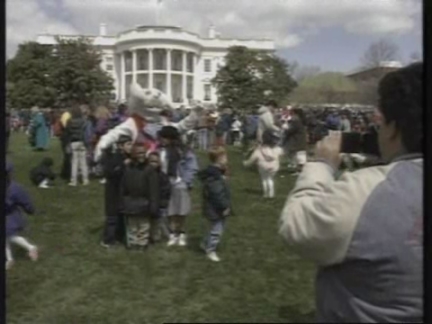 Rabbits were sighted at the White House Monday.

The Easter Bunny was joined by hundreds of children and their parents as guests of the first family for the annual White House Easter Egg Roll.

They were hoping to grab up some of the 75-hundred hard boiled and 25-thousand wooden eggs scattered around the grounds.

The President, still hobbled by a knee injury, gave the official cue starting the massive hunt.

The event dates back to James Madison's presidency.

First lady Dolly Madison had read that Egyptian children rolled coloured eggs at the Giza pyramids and thought American youngsters might enjoy it too.

In 1878, President Rutherford B. Hayes and his wife, Lucy, officially moved the egg roll to the White House grounds.

It has been staged there annually since then except during the world wars, when it was held at the National Zoo and other locations.

2. Kids posing in front of sign for easter egg roll.

5. Crowd waving to the Clintons. 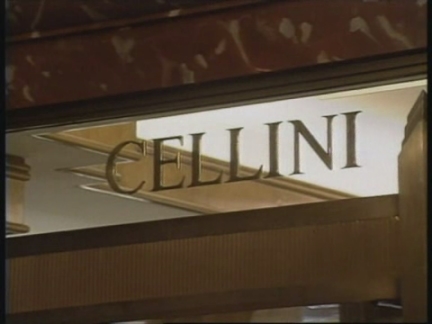 A tradition started by a Frenchman for the czars of nineteenth century Russia is still going strong in modern day New York.

On sale in time for Easter is a collection of a half-dozen delicate jewel-encrusted Faberge eggs with a starting price of (U-S) 18 thousand dollars.

The perfect Easter gift for that special someone who has everything is sure to be a delicate Faberge egg from Cellini's in New York.

Named for Peter Carl Faberge, the 19th century designer known as the egg-maker for the czars, these eggs are priced between 18-thousand and 30-thousand dollars.

Czar Alexander the third presented the first Faberge Egg in 1885 as a surprise Easter gift to his wife, Czarina Maria Feodorovna.

A tradition was born and experts estimate that a total of 54 "Imperial Eggs" were created until 1917. The last Imperial Egg on the market sold for a record 5.5 million (m) dollars.

Each Faberge egg is encrusted with jewels - diamonds, rubies, sapphires or emeralds and covered by a special enamel, a technique where gold and silver surfaces are engraved with a pattern and layered with colorful, translucent enamel.

Featured in Cellini's collection are the Mozart egg in red enamel, the Musical Egg, the Romanov Crest Egg, and the Gorbachev Peace Egg, which was created in 1990 when former Soviet president Mikhail Gorbachev won the Nobel Peace Prize.

The contemporary Faberge eggs are individually numbered and usually only one hundred of each kind is made and usually the number one egg is donated for a special occasion.

If you're lucky, the Easter Bunny will put one of these eggs, very carefully, into your Easter basket. 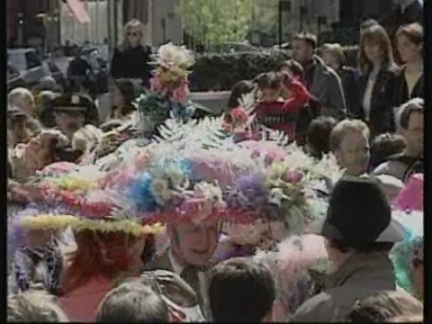 Americans have been celebrating the Easter holiday across the U-S.

New Yorkers put on their finest -- or their most outrageous -- hats to wander up and down Fifth Avenue in the annual Easter Bonnet Parade.

In one of the surest signs of spring, Easter bonnets bloomed all over New York's Fifth Avenue on Sunday.

Thousands turned out for the city's annual Easter Bonnet Parade.

While Easter is a deeply religious holiday for some, for these parade lovers it is a celebration of the miracles of millinery -- or hats.

Police close a section of Fifth Avenue to traffic for most of the day, and holiday enthusiasts fill the streets, stopping to admire creative costumes and to take photos of the best.

Many hats stuck to the holiday themes of rabbits and eggs.

However, New Yorkers on the cutting edge of cool shunned such obvious adornments.

Feathers were the height of fashion for this group.

"I feel as if birds of a feather flock together may you be Jewish, Catholic, Christian, whatever. That's why I'm wearing my Easter hat today.

Other bonnets said nothing about Easter, but lots about the personal interests of their creators.

"My mom and I decided to do the Easter Bonnet Parade and we thought we'd do a theme of what we're interested in. My mom did gardening and I did film because I'm an actress and I like film, hence the hat."

The donning of springtime's finest wasn't limited to humans.

This canine sported a green velvet bowler, trimmed with a floral spray.

For others it was a family affair, where fashion extras appeared to have been pinched from the toy box.

In Washington, bubbling cauldrons of dye were heating up the kitchen at the White House.

Rather than relying on the two-step process of cooking and then colouring, the chefs saved time by doing both at once.

On Monday, these hard-boiled eggs will be hidden in the grass of the South Lawn along with 25-thousand wooden eggs as part of the White House Easter Egg Roll.

President Bill Clinton and First Lady Hillary Rodham Clinton will host the annual event which is expected to draw 30-thousand children and parents.

So when Easter is over, what to do you do with that many eggs?

The American Egg Board suggests you serve up a helping of egg salad.

After all, it is National Egg Salad Week.

3. Family stands with egg hats on.

11. Pan from cathedral to family in hats 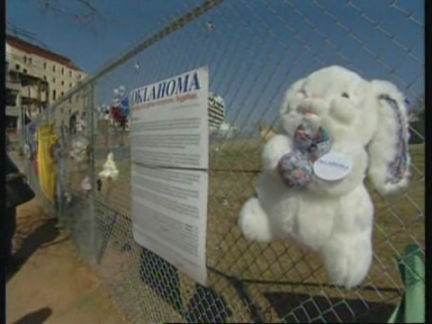 Tomorrow ( Friday) the people of Oklahoma will commemorate the first anniversary of America's worst ever terrorist atrocity.

When 168 people were killed in the city's Federal building last April 19th the shock waves reverberated round the globe.

Twelve months on, APTV returns to the city and examines the very different ways in which two people who lost loved ones are coming to terms with their grief.

Grass and broken concrete are all that remain of the Alfred P. Murrah Federal Building - but still they come - to remember the victims.

It was just a day and a year ago when a massive bomb took the lives of 168 people, changing Oklahoma City and the U-S forever.

Flowers, letters and toys continue to be sent in memory of the lives that were lost.

Many of the tokens - like this poem - are a way to cope with a tragedy that still seems to make no sense.

Edye Smith knows that pain all too well. Her two young sons were killed in the blast.

Her photos of 2-year-old Colton and 3-year-old Chase are comforting memories of their brief life together.

"It's got all their birthday pictures in it and all of their pictures with Santa Claus and the Easter bunny."

For Edye, last year's bombing was both an end and a beginning.

The long process of coping with her grief started in the rubble and smoke of the Alfred P Murrah federal building.

A year later, the pain is still there, but she says she and her family have finally come to terms with their loss.

"We've accepted it. There's nothing we can do to change it so

just try to make the best of every day. And, ah, I don't know if there is a normal, but we're at peace now."

For her, openness was a way to cope with the pain. But for her husband Tony, the memories are still too powerful.

"You know whereas I'll look at pictures of my kids and smile, Tony will look at them and cry. It's hard for him, he won't go downtown at all. He won't go to the cemetery, go through the photo albums or anything.

While Tony still has trouble facing the tragedy, others find comfort in talking about their experience.

He frequents the building site, talking to others as a way to deal with his own personal pain.

"Someone had brought that from their home to this fence to tell us they love us."

From a simple palm cross woven into the fence barrier to stuffed animals, these tokens have come to symbolize the grief felt by an entire world.

Thousands of these offerings are stored in a small warehouse on the edge of town.

Someday they will become part of a memorial honoring the victims of the Oklahoma City bombing.

They are saved here by the Oklahoma Historical Society as a reminder of the way the world came together in support.

"We feel very strongly that the reaction to the this event not only by Oklahoma City, but by the whole world, is something worth preserving. Something we should realize that there is an awful lot of love in the world."

A love that no doubt those who lost family and friends in the blast will need to draw on for years to come.

4. Man with child looking at site

5. Shot of items on fence

6. Shot of poem for dead child

22. Piles of toys from fence stored in warehouse

24. Letters from one of the children

26. Pan of letter from a child whose mother was missing