Moscow has been adorned with colourful Easter decorations ahead of one of the most widely celebrated holidays in the country.

Greek Orthodox and Eastern Orthodox pilgrims are commemorating the crucifixion of Jesus Christ this Sunday.

Catholics and Protestants marked Good Friday and Easter Sunday in March this year.

Moscow has been adorned with colourful Easter decorations ahead of one of the most widely celebrated holidays in the country.

Greek Orthodox and Eastern Orthodox pilgrims are commemorating the crucifixion of Jesus Christ this Sunday.

Catholics and Protestants marked Good Friday and Easter Sunday in March this year.

1. Wide of the Bolshoi Theatre square

"It is wow! I have heard a lot about decorations this year and really wanted to go and check them out. My friends are busy so I went on my own. And I am so impressed! Started taking photos of everything."

6. Various of floral arches and copies of different churches set up as Easter decorations

"Our city is mostly quite grey, but these bright spots (decorations) - they are very pleasant to look at."

"Everything is great. We were surprised to see that they even used fresh flowers for decorations. There interesting quests and presents, so we are really enjoying here and will now go to see other squares." 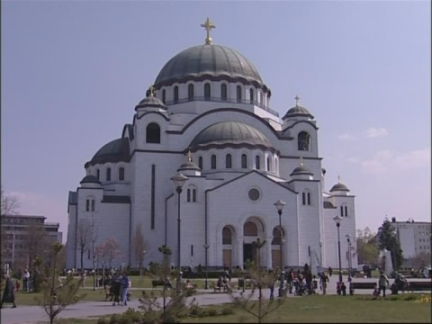 2. Close-up of cross on top of temple

"In the name of God, the Son and the Holy Spirit. Dear brothers and sisters, this Easter too, we cannot help turning to the Golgotha and the Great Friday of our Kosovo and Metohija, the he blackened minds of all those who take upon themselves the right, by violating the international law, to judge in cold blood not only about changing the status of Kosovo and Metohija but also of our entire history, culture and the statehood. The Golgotha of the Serb people in Kosovo has lasted for centuries, which is well known to all but those who have chosen to be blind to truth and deaf to listening to justice."

"Celebrating the Christ's resurrection with all the Christians in the world, today we rejoice with them and all God's creatures. Together, let us shout with joy: The Christ is resurrected, truly resurrected."

The head of Serbia's Orthodox Church linked the status of Kosovo into his Easter message this week.

He said "blackened minds" want to "change the status of Kosovo, our whole history, culture and the statehood."

The UN plan needs to be approved by the UN Security Council to take effect.

Serb nationalists consider the southern province the cradle of their medieval state and religion.

The Serbian Orthodox Church has its seat in Kosovo's town of Pec, as well as numerous medieval monasteries and churches in the province.

Kosovo has been under UN and NATO administration since a 78-day NATO-led air war that halted a Serb crackdown on ethnic Albanian separatists in 1999.

Kosovo's Serbs, who have boycotted Kosovo's public institutions, have warned of secession of the Serb-dominated north if Kosovo gains independence.