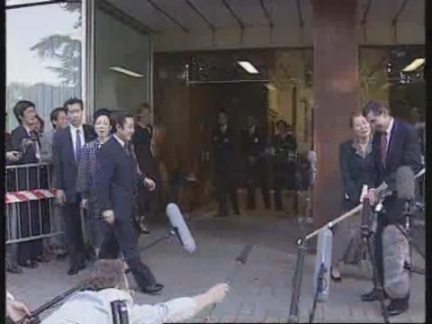 Negotiations go on into night

US trade representative Mickey Kantor was preparing for late-night

negotiations with his Japanese counterpart in Geneva on Monday

(26/6) in a bid to resolve the growing auto trade dispute.

he arrived Monday evening for the talks. Hashimoto was sent to

Switzerland by Prime Minister Tomiichi Murayama and other Cabinet

of the US sanctions threat. He and Kantor are trying to resolve

the dispute before a Wednesday night deadline set by Washington

for imposing punitive trade sanctions on Japanese luxury cars. The

two trade chiefs were set to begin their talks at 8.30pm Geneva

time (1830gmt), and sources close to the talks have predicted they

deal. Hashimoto said it would be "difficult" to reach an accord

before the June 28 date for threatened US sanctions against

would satisfy the United States.

Mickey Kantor and Japan's Trade Minister, Ryutaro Hashimoto out of

US Trade Mission. Kantor giving Hashimoto a kendo stick as a

patience. You represent all of this, so I want you to have it (the

kendo stick)." Hashimoto, after receiving the kendo stick, SOT: "I

Hashimoto replying to statement (in Japanese) SOT: "The American

deadline has nothing to do with us. We are not going to negotiate

under the American law. We'd like to pursue talks within the

context of international rules and WTO rules. That;s why I am

saying this is going to be a very difficult negotiation." Kantor

SOT (as he and Hashimoto turn away to go inside) "The28th, the 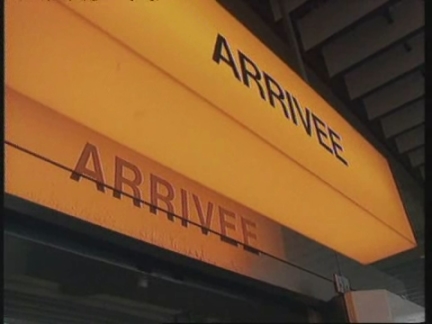 The two top negotiators in the US-Japan auto feud squared off Monday in a final push to avoid punitive tariffs that would price luxury Japanese cars out of the American market.

US Trade Representative Mickey Kantor made no predictions on the outcome of the Geneva talks.

But Japan's Trade Minister Ryutaro Hashimoto said it would be "difficult" to reach an accord before the Wednesday deadline for threatened US sanctions against Japanese cars worth nearly six (b) billion dollars.

US Trade Representative Mickey Kantor said on his arrival in Geneva Sunday that nothing less than a complete resolution to the auto dispute before Wednesday's midnight deadline could stop the sanctions on Japanese luxury cars.

But his opposite number, Ryutaro Hashimoto, was sent to Geneva by Japanese Prime Minister Tomiichi Murayama and other cabinet ministers who publicly declared Japan's intention to stand firm against the US sanctions threat.

Both sides are playing a high-stakes game.

And both said they were holding firm.

At the Noga Hilton hotel, the two negotiators made it clear to reporters that their meeting, though amicable, would be hard.

"Now I bought this especially for you, now in Kendo and I want everyone to know the minister is a great practitioner, in Kendo the standards are courage and honesty sand integrity and patience and you represent all of this and I want you to have this."

"Let me make a comment before I receive the gift, without doubt talks with Mr. Kantor requires patience. I very much hope we can carry on our conversations politely."

Hashimoto's response hinted at the bargaining in store .

But the Japanese minister made it clear before leaving for more talks that the Japanese stance remained the same - they would not allow the Americans to force them into concessions they might regret.

"I am sorry to say that the American deadline has nothing to do with us, we are not going to negotiate under the American law, we would like to pursue talks within the context of international rules and WTO (World Trade Organisation) rules and we would like to be convincing to the world public as well, that is why |I am telling you this is going to be a very difficult negotiation."

The United States insists that Japan open its auto market to foreign cars and car parts or be hit with tariffs that would virtually price almost six (b) billion US dollars worth of Japanese luxury cars beyond US consumers' pocketbooks.

Tokyo says the sanctions are illegal because they are unilateral and violate international trade rules.

Sources close to the talks have predicted negotiators will have to work right up to the deadline if they are to strike a deal.

3. Hashimoto and Kantor emerging from talks

7. Cut away of press 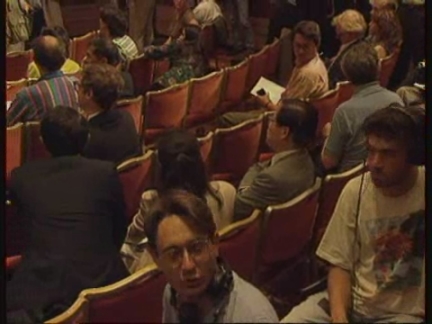 The United States and Japan have averted a potentially catastrophic trade war with an eleventh hour agreement in Geneva.

U-S President Bill Clinton had threatened to impose 100 per cent tariffs on some 6 (b) billion dollars (US) worth of Japanese cars if agreement was not reached today Wednesday.

But the deal struck in Geneva by U-S trade representative Mickey Kantor and his Japanese counterpart Ryutaro Hashimoto brought sighs of relief all round.

Today was the day which could have seen the beginning of all out economic war between two trading giants, the U-S and Japan.

In trying to resolve a 20-year-old trade conflict, U-S President Bill Clinton had threatened to impose 100 per cent tariffs on 6 (b) billion dollars (US) worth of Japanese luxury cars.

In the agreement announced 12 hours before sanctions were to take effect, Tokyo gave in to key American demands and promised to open its market to U-S auto manufacturers and increase purchases of U-S car parts.

The new accord drawn up was the most sought after document of the day.

When the trade representatives Mickey Kantor and Ryutaro Hashimoto arrived it was smiles and praise all round.

I am pleased to announce that the United States of America and the government of Japan have reached an historic agreement today. Let me take this opportunity to thank my counterpart Ryutaro Hashimoto. When Minister Hashimoto and I first met on Monday evening, one of the many times we met over the last number of months, I presented him with a kendo stick. I said at that time, the sport of Kendo represents: courage, honesty, integrity and patience. After spending a great deal of time with my friend during the last several days, I can assure each and everyone of you that he represents all of those qualities and much more.

He was so eloquent that I almost forgot what I was going to say.....So allow me first of all to explain to you what I have in my mind at this moment. I would first like to express my admiration for Ambassador Kantor, because the biggest reason for the successful conclusion of the agreement and thus having this joint conference of today is Ambassador Kantor's realistic approach and persistent efforts. I would like to say that this successful agreement between the two countries is the victory not just of the U-S and Japan, but also for the newly created W-T-O and its member countries.

The new agreement was sealed with a handshake, and what could have been the beginning of an economic nightmare heralds a new dawn of bilateral trade relations.

4. Arrival of Kantor and Hashimoto

7. Handshake between Kantor and Hashimoto