Aldo Moro's coffin in hearse along

Montage of shots of Pope John Paul talking to crowd in St Peter's Square, out of car

Pope John Paul II is due to arrive in the Philippines on February 17th, as part of his Far East Tour. His visit comes at a critical time for the country: President Ferdinand Marcos has just lifted martial law after 8 years and called presidential elections for May. This report examines the political and social background to the Pope's visit.

1: Worshippers at Baclaran Church (to be visited by the Pope);

Preparations are underway at the Vatican for Sunday's canonisation ceremony of blessed Paul VI, remembered mostly for presiding over the close of the Second Vatican Council, the 1962-65 meetings that reformed the church.

During his pontificate Paul VI, also known as Pope Montini, radically changed the Church, suppressing the Papal Court and simplifying the pompous protocol surrounding the religious and non-religious papal functions.

He also named a number of international prelates for Curia positions which had historically been covered by Italians and became the first pope to travel to all five continents.

"He suppressed the Papal Court, he reformed the Roman Curia, he suppressed the military bodies, he brought the internationalization of the Curia at its height, and most of all he was the first Pope to visit all five continents," Vian said.

Paul VI is mostly remembered as the protagonist of the Vatican II council, which he inherited from John XXXIII, guiding the three last sessions, and implementing its decisions.

2018 also marks the 50th anniversary of Paul VI's Humanae Vitae encyclical, which highlights his love for life and is the cornerstone of the modern church teachings on marriage and family, a document which raised criticism even within the church.

This encyclical is strongly connected to the second miracle which gained him the sainthood, the medically unexplainable birth of a little girl in 2014.

The baby girl, Amanda Tagliaferro, was born perfectly healthy in 2014 after for three months the parents prayed Paul VI. Doctors were astonished, they expected a miscarriage, or a baby with some kind of deformity.

Pope Francis approved the canonization of Paul VI after her birth was declared by the Church an exceptional event beyond the natural course of events.

Francis beatified Paul VI in 2014 after the first declared miracle concerning another positive outcome of a risky pregnancy attributed to the intercession of Pope Montini.

Paul VI will be canonized together with 4 other saints, and martyred Archbishop Oscar Romero, to whom he was very close in life.

The ceremony will take place in St Peter's square on Sunday during the Synod of bishops on young people.

4. Wide of St Peter's Basilica with portraita of blessed

6. Pope Paul VI and John F. Kennedy stand near model of the Pieta' by Michelangelo

8. Editor in Chief of Osservatore Romano, Gian Maria Vian, at his desk

"He changed the Vatican. He suppressed the Papal Court, he reformed the Roman Curia, he suppressed the military bodies, he brought the internationalization of the Curia at its height, and most of all he was the first Pope to visit all five continents."

11. Pope Paul VI kisses the "Stone of Pain" in the Gardens of Gethsemane on Mount of Olives during his visit to Israel

12. Pope Paul VI at the United Nations before addressing the General Assembly, as the first Pope to do so

"The Pope inherited the Vatican II Council from his predecessor John XXIII. Probably Montini would have never convened a Council since he was probably aware that it would have been very difficult to handle. However, once it was opened by John XXIII, Montini embraced it, managed it, closed it and implemented it."

"(Talking about the miracle said to have been performed by Paul VI) The foetus survived with no amniotic fluid for three months. She (the mother) was hospitalized five times to try and regain her amniotic fluid, but her body kept expelling it. In the end the little girl was born on Christmas Day. Furthermore she was in breach position, and the mother had had her firstborn with a caesarian section. They decided to avoid cesarean section and attempt a natural birth since they didn't want another operation as they were afraid of what was going to happen. Then the doctors saw something they couldn't believe, she was a healthy little girl, who's now two years old, born on Christmas day. So, this sort of tells you what happened. I say that the miracle lasted for three months. I jokingly said that Paul VI owes three months of rent to the baby's mother since he was settled down with them for three months."

17. Portrait of Pope Paul VI after his election

Pope Paul VI pays a visit to the Kashmir area of India where he is treated to traditional Indian dancing inside an ancient temple.

3. ms balcony with sign VALE OF KASHMIR, tilt down to model boat on water and ducks

5. ms sign on roof of building OUR HERITAGE, pan to portrait

6. vs paintings of Indian people

7. cu statue of two elephants balancing a wheel on their trunks

11. ws large studio light is trained onto the Pope

12. vs Pope travels through crowd in temple in an open cart

13. ms Pope walks on to dais and microphones

Pope Paul VI tours the United Nations building and addresses the General Assembley, after speaking to officials including Jackie and Robert Kennedy and Andrei Gromyko.

SD version available in \\Source_Clips\Stories too long for web

1. ws and pan exterior of UN building with flags

3. ws and tilt down interior UN building Pope Paul VI walks into General Assembly building with entourage and is greeted by Secretary-General of the United Nations, U Thant. Zoom in to the two men shaking hands

5. ms and pan U Thant and Pope walk through building; Pope is greeted by Amintore Fanfani, ex-Italian Prime Minister

7. ws Pope enters chamber of General Assembly and is applauded

8. ws members of the council stand and applaud

9. ms Pope Paul VI addresses the assembly in French. Speaks of the need for peace and humanity to work towards creating a more peaceful world for all, Quotes John F Kennedy, assassinated President of the United States of America

10. ms assembly and pull back to members applauding and standing

11. ms Pope and U Thant enter reception area of building

19. ls other dignitaries with Pope

23. ls Andrei Gromyko, USSR Minister of Foreign Affairs, at 10:73:00 Nikolai Fedorenko, Permanent Representative of the USSR, comes over and speaks to Pope

26. ms Jackie and Robert Kennedy at reception speaking with other guests

+++Many of the following shots are out of sequence+++

16. ls Pope shakes hands with VIP's in line up at foot of plane steps

17. ls Pope along and onto to podium, waving

28. ls motorcade formation on tarmac, ready to pull off

Pope Paul VI visit to New York: Press conference with US President Lyndon B Johnson. Brief shot of Pope at Yankee Stadium and makes a speech at the United Nations building

Pope Paul VI leads a Good Friday 'Stations of the Cross' ceremony in Rome, which is attended by thousands of pilgrims, outside the Coliseum.

7. ws cross made with candles

Pope Paul VI returns to Rome after his visit to the Holy Land. He is greeted at the airport by President of Italy Antonio Segni and travels by motorcade past crowds to arrive in St Peter's Square, Vatican City.

1. ws Pope waves to crowds while standing in moving car

8. high angle ls motorcade travelling down the Via della Conciliazione

10. high angle ls crowds and motorcade and on Via della Conciliazione

11. ws tracking shot people lining the roadside; pan to view of people on road ahead with flaming torches and St Peter's Basilica

13. ms travelling shot crowds line route with the facade of St Peter's behind, car then directed by police

19. ms bs zoom in pan crowds cheering and trying to get a glimpse of the Pope

24. mcu interior priests on a plane

25. vs Pope greets individuals on the plane

27. ms Pope seated by the window on the aeroplane

32. ms exterior side of aircraft

33. ws pan aeroplane on the tarmac

35. ws zoom in pan nose of the Alitalia aircraft

36. ls crowd gather near gangway while Guard of Honour stands by

37. ws crew prepare gangway while Segni stands at the foot of the steps, Pope steps out of plane

40. ws tilt down Pope and Segni walking past Guard of Honour

42. ms bs zoom out tilt up Pope and Segni walking away down red carpet

46. ms bs Pope and Segni on platform with group behind; pan as Pope walks away

Pope Paul VI says mass outside St. Thomas of Villanova Church at his summer residence in Castel Gandolfo to celebrate the feast of the Virgin Mary's Assumption.

4. MS photograph of Pope over door

33. MS of crowds in square, who acclaim new pope

40. MS pope on chair through crowds 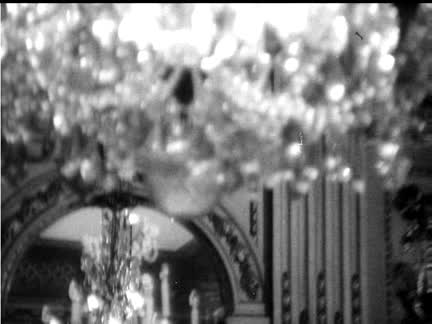 The famous Pieta by Michael Angelo which was severely damaged a year ago by fanatic now entirely restored and back in St Peter Basilion at the Vatican, protected by glass window to prevent further damage. Pope Paul VI has come down to the Basilica to see it and pray before the Pieta. The Pieta depicts Mary holding the dead Jesus in her arms. The Madonna's left arm was broken off and veil damaged, also left side of face. The assailant Laszlo Toth Hungarian born Australian judged insane and confined to mental hospital for 2 years.

6) Pope and Obote onto platform

11) Pope off platform and greets other officials

16) Pope up steps to cathedral

4. ms Pope along into Belvedere Courtyard

6. wide of crowd, Pope on throne

11. ls Pope on throne on platform

12. cu gifts from Naples on table, Pope in background

Pope Paul VI leads a procession in Rome and a service in the Basilica of Saint Sabina at the Aventine on Ash Wednesday.

4. ms Paul walks along and blesses the crowd

8. ws procession enters Basilica of Saint Sabina at the Aventine