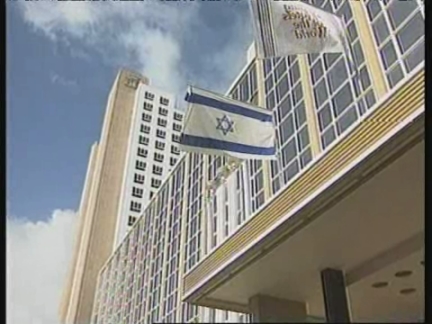 1. Israeli flag tilt down to wide of entrance of Dan Hotel

3. SOUNDBITE: (English) Shimon Peres, Israeli Foreign Minister "I think there are only excessive initiative. The minute the initiative (inaudible) stop there won't be any reaction of any sort, and that's what we are trying to do, but if somebody sits, even in Zone One, and shoots at Jerusalem day in day out, what should the government do?"

5. Jozias Van Aartsen, Dutch Foreign Minister "We hope that there is still a possibility at this stage to find an end to the deadlock as we have seen it, and see it, at this stage."

13. Wide of houses, pull in to twisted rubble

19. Close up of damage on house

23. Children on bed in damaged room

25. Wide shot of bedroom, children on bed and cameraman

Israeli Foreign Minister Shimon Peres, known as a voice for moderation and peace, said Monday that Israel was willing to use all possible means to reach to a ceasefire but, that if the Palestinians were shooting, Israel will shoot back.

conflict and the breakdown of talks between the two sides.

Later, Van Artsen headed to Jerusalem and a meeting with U.N.

Damage appeared extensive in Beit Jalla, near Bethlehem, a day after

Israeli's tanks pounded houses with artillery as they pursued gunmen who had opened fire on Israeli forces. 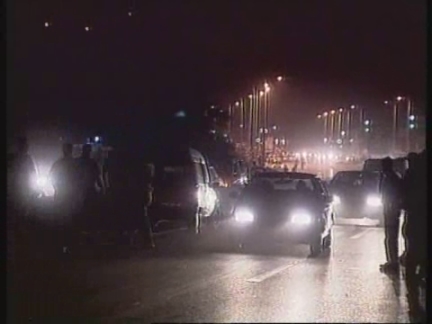 1. Emergency vehicles at scene of shooting

2. Men moving car which was damaged in shooting

4. Investigator and blood on ground

6. Blood on car and bullet hole in car door

8. Various of aftermath in the area

9. Close up damage to buildings

10. Various of hits by shells in buildings

11. Close up of body being carried out from house

12. Various of people chanting and marching with body.

15. SOUNDBITE: (English) Vox Pop, demonstrator, "Last day on Shabbat, the day of Shabbat when the kids were gathering together for their extra curricular activities the bomb just fell among them the kids, those kids behind me save the life of one of their friends its owing to him his life. But we don't expect miracles to be the routine of our life. For the time being its routine - both miracles and war."

18. Road on which bomb exploded

Violence in the Middle East continued on Sunday despite efforts by Jordan and Egypt to secure a cease fire in the region.

An Israeli man has been killed and an Israeli woman injured after being shot at in Northern Israel.

Israeli police say they suspect the shooting was the work of Palestinian terrorists.

According to newspaper reports in Israel, the car occupants were a family of five travelling back from a trip in northern Israel.

They were shot at near the town of Umm al-Fahm after a car carrying three Arabs stopped them to ask directions, apparently opening fire when the people in the car spoke Hebrew.

The man killed was the driver.

One woman passenger escaped with light injuries and three other passengers were unhurt.

Umm al-Fahm is in southern Galilee, a few minutes drive from the West Bank.

In the Gaza Strip on Sunday Israeli forces Sunday targeted a Palestinian command post in Die El Balah apparently in retaliation for mortar attacks on Jewish settlers in the West Bank.

Earlier on Sunday, two bombs targeting Jewish settlers exploded in the West Bank, but the only fatality was a Palestinian man suspected of setting one of the explosives, officials in Israel said.

Karka was shot by accident as Palestinians and Israelis exchanged gunfire. His son was wounded in the eye.

Outside the Prime Minister's office in Jerusalem on Sunday a group of young settlers held a demonstration against Palestinian attacks on Jewish settlments.

Also on Sunday what appeared to be a car bomb exploded near a school bus transporting Jewish students on a road in the northern West Bank, near Nablus, the army said.

According to Israeli security sources, the body of a Palestinian man was found in the badly damaged car, and he was suspected of being the perpetrator.