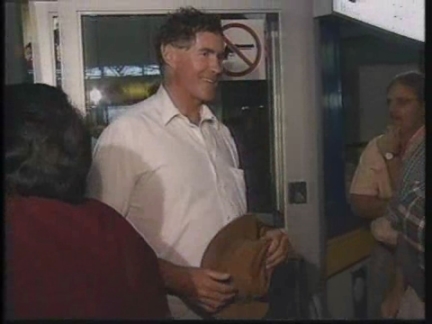 The South African yachtsman who became the first blind sailor to sail an ocean single handedly has arrived home after completing his gruelling trip.

Geoff Hilton-Barber rewrote the record books when he successfully navigated the Indian Ocean from Durban to Fremantle, Australia.

Geoff Hilton-Barber arrived safe and sound back to his family and friends in Durban this week after his daring voyage.

The 46-year-old blind sailor proved his critics wrong -- some of whom had described his trip as a suicide mission.

Hilton-Barber made his solo 50-day, six-thousand nautical mile voyage across the Indian Ocean on his yacht "Abacus".

The solo trip would stretch the capabilities of any sailor, let alone one who couldn't rely on the most fundamental of human senses.

"It had its ups and downs and scary times but the good times were much better and it was a tremendous adventure which I wanted to do for a long time."

Hilton-Barber -- who before losing his sight as the age of 20 was an active runner and skydiver -- used braille charts and audio electrical equipment onboard to navigate.

The rest of his yacht was standard.

At a push of a button, an electronic voice would tell him where he was, what course he was doing and at what speed.

There was mixed emotions at dockside when he set sail on December 1st last year.

Before his adventure, no blind person had ever sailed single-handedly crossed an ocean.

A blind American sailor had come closest after sailing from Los Angeles to Hawaii.

Hilton-Barber kept close radio contact with his wife Carol at their home base in Durban.

But there were some scary moments.

Before he reached Australia his power generator failed and cut off his communications system.

"There was just one time when things were going wrong with the instruments that we were losing communication which was difficult. We had spoken every day so I was relaxed. So we had a few grey-hair moments but all is well that ends well."

After his record-setting sail, Hilton-Barber will have to get used to a more sedate life back on dry land.

00:27 Hilton-Barber goes down below

01:01 various of Hilton-Barber casting off and friends waving goodbye

01:50 Hilton-Barber and family walk from airport to car