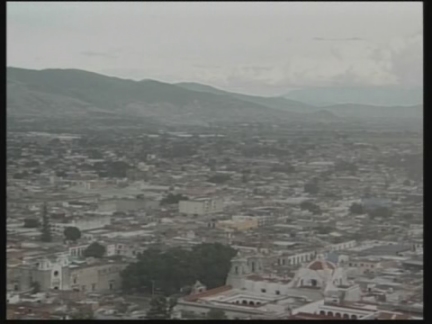 1. Wide of faithfull during religious service

2. Medium of the same

your homosexuality from you, so basically they are not accepting me. The

gospel to everbody, without wanting to change them".

7. Medium of Miguel and Luis exchanging rings at their wedding

was a lot of oppression, the inability to interpret the gospel beyond

question faith and to live as a homesexual. I could not live my

homosexuality entirely because of the guilt and all of that"

"It was difficult for my father. My mother had been known for years,

but my father found out only weeks before the ceremony took place. But

they were all here with me".

"If the sexual problems of the Catholic Church are due to

homosexuality, how can it explain the heterosexual rapes, the

paedofilia? We have in several occasions been asked whether we would

have refused, we have a zero tolerance policy with regard to paedofilia"

Mexico, traditionally the feud of the Catholic Church in Latin America, is getting ready for the fith visit of Pope John Paul II.

8 million pilgrims are expected to gather around the Basilica grounds where the Pontiff will conduct the cannonisation of the first Mexican Indian, Juan Diego, on the 31st of July.

But not everybody feels included in the celebration.

The Church is widely discredited for recent scandals of sex priest abuse - such as the reported cases of paedofilia and rapes of nuns - and Mexico´s gay community says to have felt the consequences.

At the Metropolitan Community Church in Mexico City, a small community wants to include the outcasts from conventional christianity.

They accept everybody, homosexual and hetorosexual, who feels discriminated by traditional Catholic and Evangelists churches.

But they admit, their cult is a mix of both rituals in an attempt to appeal to the widest audience possible.

According to Rev. Jorge Sosa, they have been asked in many occassions to allow priests - relieved of their duties within the Catholic Church due to paedofilia accusations - to accept them, but, he says the community has refused.

Here in Mexico City, this unconventional church has a limited bunch of regular faithfull.

Gay attitudes are not easily accepted in this very traditional, Catholic and highly "macho" society.

Miguel, a declared homosexual, started coming to the church in 1993.. After a lapse of three years, he returned to it in 1998.

On March 2001, he got "married" to his partner Luis Alvarez at the church.

Miguel is a fervent activist for gay rights and he also actively participates in the religious services of the church.

So is his partner Luis.

The church is not not registered at the Ministry of the Interior and it survives thanks to private donations.

The first Metropolitan Community Church was born on Oct. 6 1968 in California, U-S, with a mission to minister to lesbians and gay men.

Its founder, Reverend Troy Perry, was a pastor for the Church of God until he was excommunicated for homosexuality.

There are over two hundred congregations in nine countries, it is the largest organization in the world ministering to gay people.