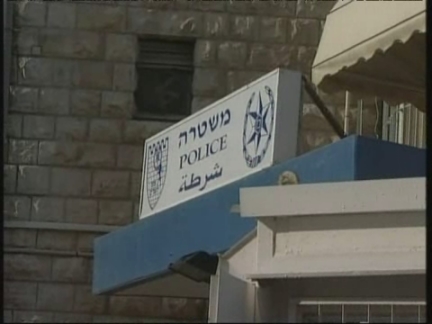 1. Exterior of police station, tilt down from sign reading "police" to policewoman

3. Close up of Vanunu inside the car

Based on Vanunu's evidence, including photos, experts said at the time Israel had the world's sixth largest stockpile of nuclear weapons.

An Israeli court had ruled in May (2005) that an earlier visit by Vanunu to the Palestinian areas did not constitute a violation of his conditions of release, which forbid him from visiting foreign countries.

Vanunu was arrested at a West Bank crossing into Jerusalem as he rode on a Palestinian bus, said a police spokesman.

"I was arrested because they don't want to let me enjoy freedom," Vanunu told reporters as he was lead to a police van at a Jerusalem police station.

Vanunu was arrested because Israelis have been forbidden from entering areas under full Palestinian Authority control since fighting broke out between the sides in 2000, police said.

Police were also questioning Vanunu to find out what he was doing in the West Bank, police officials said.