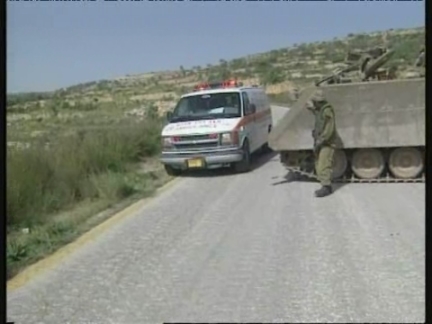 I told him (U.S. Vice President Dick Cheney) that I think that I should be allowed to speak in front of the summit (in Beirut) and explain Israel's positions and plans. Because at the end of the day without Israel there is no possibility to lead any peace plan."

4. Pull out to wide shot of cabinet meeting

Israel condemned the killing of an Israeli woman in the West Bank on Sunday and said the only way for Palestinians to achieve their political goals was by negotiation.

The woman was shot dead by Palestinian militants while riding in a car near the entrance to the Jewish settlement of Ateret, not far from the West Bank city of Ramallah.

The killing occured as U.S. peace envoy Anthony Zinni planned another round of Mideast truce talks set for later in the day.

The meeting between the two sides may help Zinni decide whether Palestinian leader Yasser Arafat has accepted U.S. conditions for a cease-fire and will work to implement them.

The persistent violence has complicated efforts by the U.S. mediator to work out a cease-fire that could halt 18 months of Israeli-Palestinian violence.

No Palestinian group immediately claimed responsibility, though militants have frequently targetted Jewish settlers on roads in the West Bank.