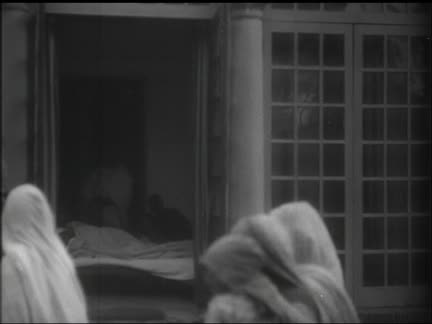 The British begin their withdrawal from Palestine. 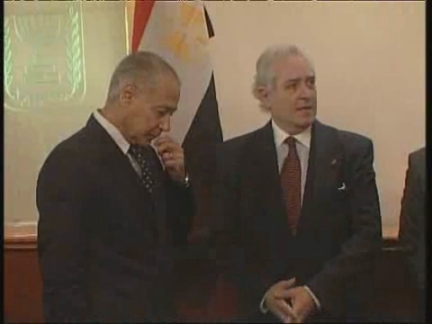 "I am sure that the visit here of our honoured guest and the honoured delegation that came with them will lead to a tighter relationship between Israel and Egypt and will contribute to the advance of the peace process in the region."

"We, General Omar Suliman, the chief of Egyptian intelligence, and myself, are coming to Israel today in important if not critical times for the stability and peace in the Middle East. There will be a range of issues that we hope to discuss, bilateral Israeli-Egyptian important issues, serious issues too. The Palestinian question, how are we to tackle the Israeli withdrawal from Gaza as well as parts of the West Bank."

6. Sharon and Aboul Gheit sitting down

Egypt's foreign minister and Israel's prime minister on Wednesday discussed the terms of a planned Israeli withdrawal from Gaza in 2005, including the deployment of hundreds of Egyptian troops to ensure calm along the volatile Egypt-Gaza border.

Israeli officials have previously been cold to such overtures, saying Syria must first crack down on Palestinian militants operating from its territory.

Sharon initially envisioned Israel's withdrawal from Gaza and four West Bank settlements as a unilateral act, arguing that he has no Palestinian partner.

However, since Yasser Arafat's death Nov. 11, Sharon has expressed willingness in principle to coordinate the withdrawal with the new Palestinian leadership.

Egypt remains an important mediator, however.

Egypt has offered to deploy troops along the Egypt-Gaza border and to train Palestinian security forces.

Israel is interested in Egyptian help because it fears a Gaza withdrawal will leave a security vacuum, particularly in Gaza, which has been plagued by increasing chaos in recent months.

Palestinian militants have also stepped up attacks on Israelis in the area in recent months to make it appear as if Israel is fleeing the strip.

Concerning the Gaza withdrawal, Egypt is ready to deploy 750 troops on the border with Gaza to stop Palestinians from smuggling arms into the territory, senior Israeli officials said Wednesday.

Israel will most likely accept this, but has not yet made a final decision, the officials said on condition of anonymity.

Egypt is also trying to work out an Israeli-Palestinian cease-fire, trying to seize an opportunity created by Arafat's death.

Leaders of militant groups have indicated they are ready to halt attacks if Israel stops targeted killings of fugitives and scales back military operations.

Israel is not ready to make iron-clad promises, the Israeli officials said. 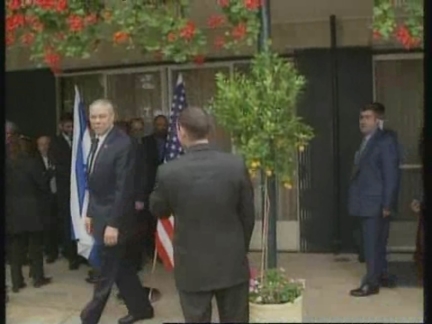 2. Presser as Powell and Sharon arrive

4. Powell and Sharon at presser

"Israel is waging a war against the infrastructure of Palestinian terrorism and we hope to conclude this war very soon." (pauses for English translation)

"The suicide bombers' terrorism represents a danger for Israel and the entire free world."

"Israel is the only democracy in the world in which there are guards in every school and every kindergarten in order to protect the children against Palestinian terrorists."

"The Prime Minister and I had good discussions on the nature of the operations that are under way. He understands President Bush's position, we had a chance to exchange those positions, and I'm pleased that he is anxious to bring these operations to an end as soon as possible and I hope that in my stay here we will have time to discuss this at some greater length. Mr Prime Minister, I hope that in the course of my visit and my conversations, not only with you and members of your government but with President Arafat and other Palestinian authorities, a way can be found to move forward. I also want to share your concern about the situation on your northern border. I think this is the time for all parties in the region who have a commitment to peace, who truly believe in peace, and want to see the end of violence, all parties in the region must play a role to restrain any aggressive activities across Israel's northern border. We have been in touch with governments in the region on this subject and will continue to press that point with them. Mr Prime Minister, I thank you for your welcome and I look forward to further discussions over the next several days."

7. Pull- out to wide shot presser

8. Powell listening to reporter question about a timetable for Israel's military withdrawal from Palestinian territories and whether Powell was convinced of the need for the present military action.

"On the last point, the Prime Minister has indicated his support for a process to move forward politically through his acceptance of the Mitchell report and we have talked about ways to move forward. With respect to specific discussions, timetables and the like, we shared and exchanged views and I look forward to further exchanges of views in the next couple of days, but don't have a specific answer on timing."

Initial talks between the Israeli prime minister and the visiting US secretary of state on Friday failed to yield a definite timetable for an Israeli military withdrawal from the occupied Palestinian territories.

At a news conference after the meeting, Secretary of State Colin Powell said he and Prime Minister Ariel Sharon had discussed the pull-out of Israeli forces from Palestinian regions, but did not reach a "specific answer" on a date.

Sharon told the news conference that Israel was "waging a war against the infrastructure of Palestinian terrorism and we hope to conclude this war very soon".

Powell arrived in Israel on Thursday - the latest stop in his Middle East peace mission.

He faces the difficult task of convincing Sharon to pull back Israeli tanks and troops from the West Bank as a first step towards negotiating a Palestinian state to coexist with Israel.

Powell and Sharon posed for cameras before their talks on Friday.