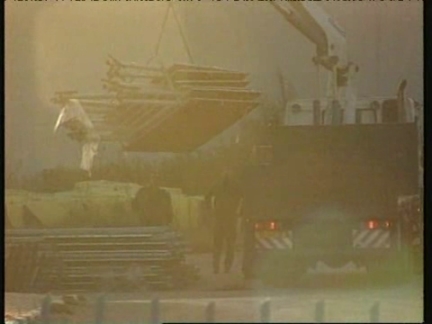 Israeli troops have begun pulling out of parts of the northern West Bank after nearly two years of U-S prodding and bitter disputes with the Palestinians.

Army trucks pulled out of Dotan base near Jenin and began deploying 130 black-and-yellow concrete road markers at intersections to delineate new boundaries.

The Israeli government gave the final go-ahead on Thursday to withdrawing troops from a chunk of the West Bank the size of Chicago.

The cabinet narrowly approved the decision, seven to five with three abstentions, after acrimonious debate.

The pullback will give the Palestinians full or partial control of an additional nine point one percent of the West Bank.

No army bases or Jewish settlements were dismantled in the withdrawal.

As part of the agreement, Israel also pledged to release 750 Palestinian prisoners, with the first 250 to be freed later on Friday.

The withdrawal marks a point of no return for Prime Minister Benjamin Netanyahu who, since coming to power in 1996, had zigzagged on the peace process and now faces the loss of support of key allies and possibly early elections.

As a result of the pull-out, the self-rule city of Jenin will now come under full or partial Palestinian control.

"We're very happy, all the people are happy."

"If you are the Palestinian people, you know exactly what will happen to every person in our village, because Israeli soldiers will get from our village. We wish them to get to another country from out of the village."

It's thought the redeployment will put another 28 towns and villages in the West Bank under complete control of the Palestinian Authority.

Since Israel has no military bases in the areas, the handover is expected to take place unceremoniously.

11. Palestinians in the street

12. Listening to the radio with news on redeployment 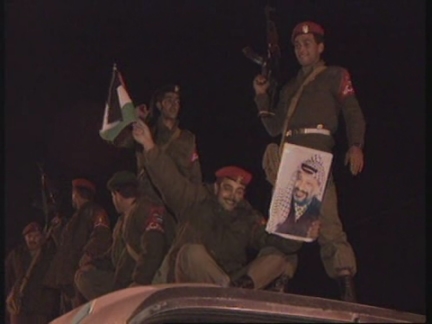 Thousands of Palestinians have been celebrating in Nablus after Israeli troops withdrew from the West Bank city, ending 28 years of occupation.

The withdrawal, which was expected to begin late Tuesday or early Wednesday, caught the city by surprise.

It apparently was moved forward to prevent opponents of the peace process, Israeli or Palestinian, from organising protests.

Several hundred Palestinian police arrived in the town, joining a small contingent that had been in place for several days.

They took over from the Israelis, who finally withdrew after 28 years of occupation.

The official handover took place inside the Israeli base.

The final formal act of the Israeli soldiers in Nablus was to sign the papers handing over police control to the Palestinian administration.

Then it was time for the few remaining Israeli troops to drive out of the gates -- with a Palestinian escort.

As soon as they'd left, crowds rushed into the building, to see for themselves that the Israelis had indeed left for good.

The burning of Israeli flags was perhaps predictable.

But the night sky was also lit with fireworks.

This means the beginning of our big dream in building our state is starting right now.

I came here to celebrate with my people.

The smooth pull-out calmed fears raised by a series of clashes between soldiers and local residents in recent weeks in Nablus.

Last Friday, a Palestinian man was shot and killed there by Israeli troops.

The army had banned Israelis from Nablus as of Sunday to avoid attacks on them during the delicate handover period.

At the Nablus prison, which the Israelis cleared of inmates several days ago, mothers with children joined hundreds of other Palestinians exploring cells.

Many of them had spent time inside, during the 1987-1993 Palestinian uprising.

5. Residents cheering and clapping on the streets

6. Various - Inside Israeli base Palestinian and Israeli officials sinning agreement

7. Outside the army base - Israeli army jeep leaving base escorted by Palestinian police

9. Crowds running - celebrating inside the army base

15. Shooting in the air as part of the celebrations

16. Various - soldiers celebrating on top of a bus

18. Walking in the corridors

19. Residents walking behind the bars